MAN ON A MISSION

Northern's Isaac Bartel has one thing left to do, and that's win a national title 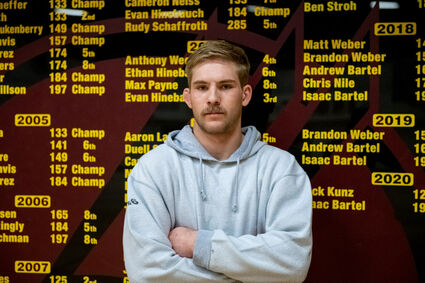 Montana State University-Northern's Isaac Bartel stands in front of the Northern Wrestling All-American wall, a wall that bares his name after he has placed in the top three at the national tournament in each of the last three years. Now Bartel is ready to add his name to the wall one more time, but he is only looking to do it as a 197-pound national champion.

There's no question, Montana State University-Northern wrestler Isaac Bartel has had a singular focus from the moment the 2020-21 wrestling season started. Actually, that focus to win an NAIA national champion really started the second he walked off the mat after a loss to Grand View's Evan Hansen in the 197-pound national championship match last March in Wichita, Kansas.

You see, Bartel is one of those wrestlers, those athletes who can truly say, they've almost done it all. All, that is, except for win the ultimate prize - a national championship.