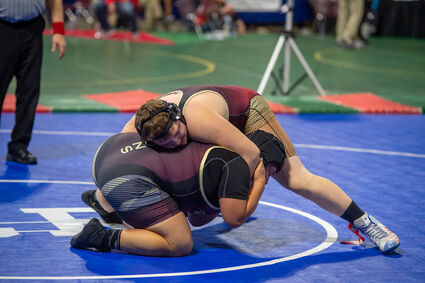 Fort Benton/Big Sandy's Brock Hanford competes in the 2020 Class B-C state tournament last February in Billings. Hanford qualified for state again this year, but instead of Billings, the tournament is being held this weekend in Shelby because the All-Class state tournament was canceled due to COVID-19.

It's a different venue, but it will still be the same excitement.

For one year, the Class B-C state wrestling tournament will have a stage all to itself as the tournament moves to the Shelby High Gymnasium Friday and Saturday. The All-Class State Tournament was canceled this season due to coronavirus, and all of the tournaments are being held at separate sites, but it won't dampen the enthusiasm this weekend as the B-C wrestling season draws to a close.

And that stage will include plenty of Hi-Line grapplers, including the Chinook Sugarbeeters, who qualified three for state, but all of whom can make an impact, including heavyweight Wyatt Dunbar, who is looking to reach the podium for the second straight year. Tyler Schoen at 170 pounds could also make some noise for head coach Perry Miller's team this weekend.

Of course, Chinook is always battling for a Class C trophy at state, but the co-op of Fort Benton/Big Sandy has really emerged in recent years as a wrestling power. And the Longhorns/Pioneers are sending eight wrestlers to Shelby this weekend. Among them will be heavyweight Brock Hanford, who has been tough all season, while Hayden Axtmen at 182 and Cade Ball at 152 should also be tough this weekend.

Harlem will also send three grapplers to state, led by Mikkel Rider, who took sixth at 205 pounds at the eastern B-C, and Lance Blackcrow, who was sixth at 182. Darrius Longknife also finished eighth at 145 for the Wildcats, to round out a young Harlem team excited to compete at state.

And competing will be tough as the B-C ranks are deep.

Defending state champion Glasgow, as well as Eastern B-C champion Huntley Project will be heavily favored from the east, while Townsend won the Western B-C and Whitehall and Cut Bank were really strong, too. In the Class C trophy race, Circle should be tough to beat, though Fort Benton/Big Sandy and Simms are the teams most likely to give the Wildcats a run for their money.

The Class B-C state tournament will get underway Friday morning and run through Saturday afternoon's finals at the Shelby High Gymnasium.