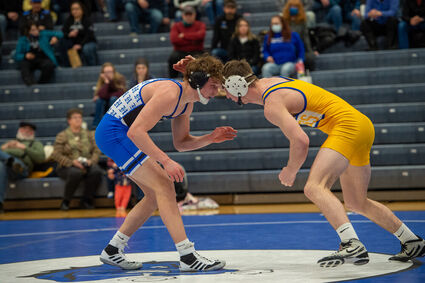 Havre's Orion Thivierge and Lewistown's Keaton Potter battle in a regular season dual last month in Havre. Thivierge, a returning state champion, and Potter are part of a loaded 170-pound class at this weekend's Class A state tournament, which will be held in Miles City.

After finishing fifth in the Eastern A Divisional this past weekend, the Havre High wrestling team will finish its season at the State A Tournament this Friday and Saturday in Miles City. More than 200 wrestlers from over 20 schools from across the state will compete in the tournament.

And while the Blue Ponies did not get the best results at divisionals, Havre head coach Beau LaSalle believes his wrestlers are ready to compete at state.