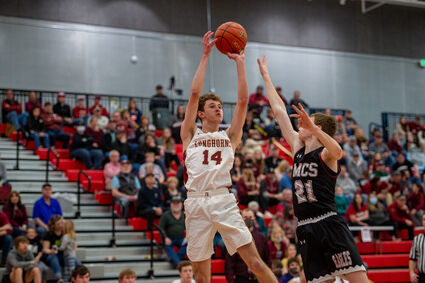 Fort Benton's Nick Marias raises up for a shot during Saturday's consolation game of the Class C state boys tournament in Billings. The Longhorns would fall to Manhattan Christian after beating Belt in a loser-pout game Saturday morning. For more photos, go to www.havredailynews.com.

BILLINGS - The postseason had been kind to the Fort Benton boys basketball team. First, the Longhorns repeated as District 9C champions and then won the Northern C for the second year in the row. They also opened play in the State Class C Boys Basketball Tournament with an overtime win over Froid/Med Lake.

However, the Longhorns' magic came to an end as their season ended with a 56-40 loss to Manhattan Christian in the state consolation game Saturday at Lockwood High School in Billings. While their season did not end with a win, Fort Benton head coach Tyler Pasha is proud of what his te...