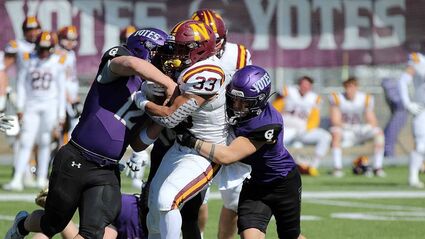 Montana State University-Northern's Andrez Trahan-Proctor runs into the College of Idaho defense during Saturday's Frontier Conference game in Caldwell, Idaho. The Lights fell to the Yotes 26-12 in their first game since November of 2019.

It wasn’t the end result the Montana State University-Northern Lights were after. No, they went to Caldwell, Idaho, to win. But it still felt really good to just be playing football again.

Saturday, the Lights fell to the fifth-ranked College of Idaho Yotes, 26-12, in the Frontier Conference spring season-opener for both teams. It was Northern’s first game since Nov. 16, 2019, when the Lights closed out that season against the Yotes, also at Simplot Stadium in Caldwell.

Since that game, there had been no football for more than a year due to COVID-19, but that all changed Saturday whe...