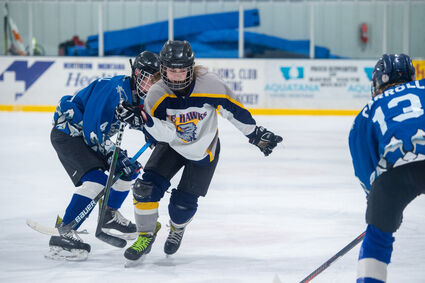 Havre's Tanya Ralph skates away from a Helena defender during a 14U state tournament game Friday at the Havre Ice Dome. The Ice Hawks wound up finishing fifth in the bantam tournament, which ran Friday-Sunday in Havre.

After two straight losses to open the State 14U hockey tournament, the Havre Ice Hawks needed to rebound on Sunday morning against Bozeman to place fifth in the tournament.

Facing the possibility of going 0-3 in a tournament at their home venue, the Havre Ice Dome, the Hawks woke up on offense to defeat Bozeman, 10-1.

"It's like with any athletics, you want to get a good sleep and put the past behind you and move forward," Havre head coach Jared Boyce said about how his team got back on track for the win. "They did that well, and they did a good job on Sunday morning beating Bozeman."