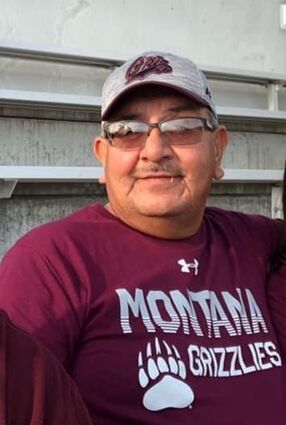 Please visit Rick's online memorial page and leave a message of condolence for his family at http://www.hollandbonine.com .

Rick was born on a cold winter day on the 26th of December, 1959, to John "Roddy" Sunchild Sr. and Florence Stump Sunchild. He liked to consider himself THE best Christmas present, yet always said he was cheated out of presents having been born the day after Christmas. Rick was born and raised in the traditional way of life, being his Faith, the Pipe, Sweetgrass, Ceremonies, and carried himself in a humble way. He always had a gentle word, a bright smile, and a handshake for all.

Rick attended Box Elder High School, excelling in football throughout his high school years. It was during this time he met and married his high school sweetheart and the love of his life, Mona Azure Sunchild. Together they shared 41 years of growing, learning, laughter, and love with their beloved children, Allie (Cody) Mattfeldt and John Sunchild III, and grandbabies Calen and Caleb.

Rick was most happy when surrounded by family, most especially his Nosim 1 and Nosim 2, who were the light of his life.

He enjoyed his home and took pride in knowing that his yard was voted "Best Yard in Haystack." We will continue this for him.

In the fall of 1986, he began his 35-year tenure with the Rocky Boy School District, and was still a part of the staff. He was a part of initiating the beginning of the high school football program, where he was a coach for many, many years. He was a proud Star fan and loved being a part of the students' lives. Rick had pride in his career as an influential coach, and loving and caring teacher. He was also a mentor, brother, uncle, father, husband, and most importantly, a spiritual leader.