Griz spring games will be on TV, have some fans 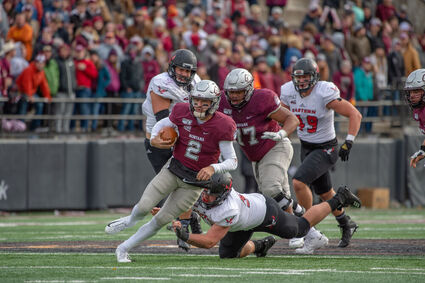 Montana quarterback Cam Humphrey runs away from the Eastern Washington defense during a 2019 Big Sky Conference football game in Missoula. Humphrey started several games that season as a Griz backup but is now expected to be the starter going into Montana's two spring games the Grizzlies have scheduled. It was recently announced that both of those games, which are set for next month, will be televised and have limited fans.

This who have dearly missed Griz football - thew wait is almost over. And now Griz fans will also know just how they can watch them Montana football team play two games, and when.

Last week, the University of Montana announced that the Grizzlies will have a limited number of fans in attendance at its two spring football games, kick times have been confirmed, and Cowles Montana Media will provide a statewide broadcast with a world-wide stream available.

In partnership with the Missoula County Health Department, Montana will be permitted to welcome roughly 5,000 fans inside Washington-Grizz...