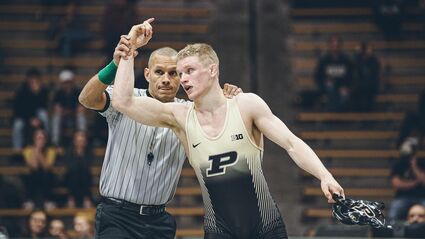 Former Havre High four-time state champion Parker Filius went 2-2 at last weekend's NCAA national championships in St. Louis. Filius, who is a red-shirt junior at Purdue, finished a strong season with a 9-9 overall record and, because of the pandemic, still has two years left.

It should have been his second straight NCAA tournament, but because of the coronavirus, former Havre Blue Pony four-time state champion Parker Filius made the most out of his first trip to nationals.

This past weekend in St. Louis, Filius, a junior for the Purdue Boilermakers, went 2-2 at the national tournament, with a first-round loss, two consolation-round wins, and a loss two matches shy of All-American honors.

Filius opened the 141-pound bracket with a 1-1 record Thursday, losing in the first round but coming back to win in the first consolation round. Filius lost to South Dakota St...