Still time to catch the action at Freezout Lake 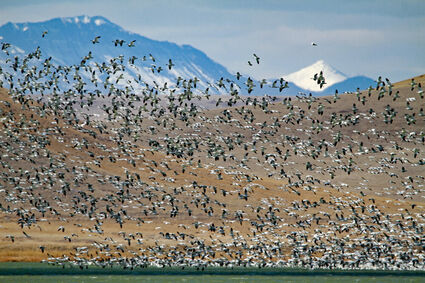 Geese and swans fill the air at Freezout Lake.

It's not too late this year to catch the annual spring migration of tens of thousands waterfowl at Freezout Lake Wildlife Management Area along the Rocky Mountain Front.

This year, said Dave Hagengruber, Region 4 information officer for Fish, Wildlife and Parks, the migration, which generally peaks around March 25, is running a little late, so people still have a little time to take in the sights.

"It's very weather-dependent," he added. "Storms might hold the birds up or might get the birds to stop here longer, or they might propel the birds to move off."

FWP biologists travel a route around the waterways each morning to survey the birds and estimate the numbers. The peak days for white geese - the general term for snow geese and Ross' geese, both of which are white with black on their wings - so far this spring have been Tuesday and Wednesday, with 49,500 and 49,000 birds respectively those days.

The swans, both tundra and trumpeter swans, seem to have peaked with about 4,500 birds March 19 and have gradually been tapering off in number, he added, which is a little earlier than normal.

But the birds are driven by their own sense of timing.

"They don't want to get up to where they're going to nest and have it be the middle of winter," he said. "They need to time it so they can get there as early as they can but still have a place to nest and still be able to forage for food and be able to get a meal when they get there."

The birds, which nest on or relatively near the arctic coast, want to get their eggs laid and their babies hatched and matured, so they're big enough to fly back south in the fall, he added.

The series of pond and lakes on the wildlife management area, generally referred to as Freezout Lake, is supplemented through a series of ditches, dikes and water control structures by water from the Greenfield Irrigation District.

The entire wildlife management area is along U.S. Highway 89 between Fairfield and Choteau, about 150 miles from Havre through Great Falls, or about 170 miles traveling through Shelby.

Access to Freezout Lake is free, including camping, which many avid birders do after traveling across Montana and even from out of state for the experience, Hagengruber said.

"It's totally free to go and watch the birds - you just drive there. Birding like this is not competitive ... everybody can see the birds," he said. "If you're willing to talk to people around, there's a lot of people that know an awful lot about those birds that are there that are really glad to answer questions for people. And not necessarily Fish, Wildlife and Parks staff, but just birders that are there. People come from a long ways and spend sometimes days there and they have a good handle on where the birds are and what they're doing."

Peggy Ray, a serious amateur photographer in the Bear Paw Mountains, said she had the Freezout Lake migration on her bucket list for 10 years and finally went with a friend Saturday for the first time.

"There's just a big mass of white out on the water," she said, adding that when they take off, they all do it together, "and the racket they make when they move is just amazing."

Because she knows someone who farms next to Freezout, Ray said, she got to see the birds feeding in the grain fields.

The birds, which also include other waterfowl such as Canada geese and nothern pintail, mallards and other ducks, take off all together shortly after daybreak, Hagengruber said, to feed in nearby fields then return to the water late morning, then leave to feed again in the late afternoon and return before sunset.

Photos of the birds taking flight together show a mass of white and black wings rising through the sky.

An important resource for people intending to take in the birds at Freezout Lake is the FWP website at https://fwp.mt.gov that has a link to an extensive set of pages dedicated to Freezout, he said. Along with historical information, the site provides maps, rules for using the area, tips for watching the birds and a migration status that's updated daily during migration season. It includes daily counts of the white geese and swans, a current graph of bird populations on the water, as well as descriptions of where the birds were found during the morning count.

"If at all possible, to experience it just once, it's just really something to see," Ray said, including the scenery with the Rocky Mountain Front as a backdrop to the west and expanses of broken prairie and farm land all around.

She said she plans to go back again.

She added that even if you bring a high-powered camera lens, binoculars are important, and she suggested bringing a lawn chair if you plan on being there for a long time.

Hagengruber recommended also bringing appropriate dress for varying early spring-late winter weather and a waterfowl or bird book, though he added that whether you can or want to identify the waterfowl or not, the sheer number of birds is worth seeing.

"Anybody can make it what you want," he said.

Everybody should go to Freezout for the spring migration at once, he added.

"It's something here that's pretty unique in Montana and it's pretty easy," he said. "It doesn't take a whole lot of special skills or knowledge or vehicles or equipment. It's just drive there and be there at the right time and you'll get to see one of the really spectacular natural events that happens in Montana every year."