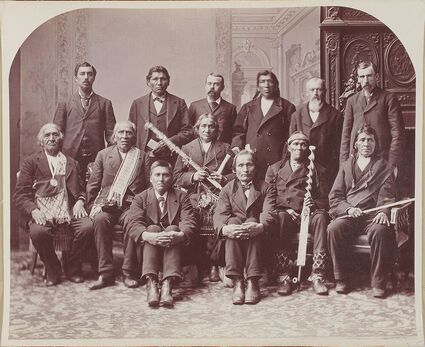 Photograph provided by the National Museum of the American Indian

Studio portrait of the Anishinaabe (Chippewa/Ojibwa) Delegation. Taken in Washington, D.C., in 1880.

A settlement is finally on the way in a dispute some 150 years old, in one of the earliest lawsuits filed claiming the federal government had mishandled trust moneys it held for Native American tribes.

"It was what I call FILO, first in, last out," Native American Rights Fund attorney Melody McCoy, who is representing the plaintiffs, said.

McCoy said final approval in a settlement of a claim going back to land transfers in 1863 and 1892 was made in November 2020, and NARF is trying to contact all eligible people who could receive an award before an April 29 deadline to opt out or to submi...