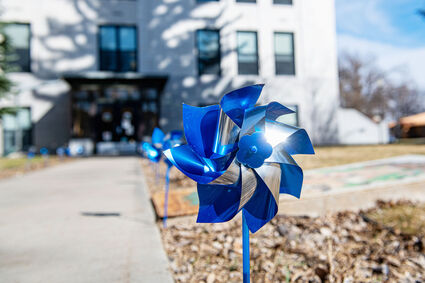 April is Child Abuse Prevention Month and organizations in Hill County and across Montana are using the opportunity to increase awareness about the issue, which has been more severe during the COVID-19 pandemic.

Court Appointed Special Advocates of Hill County, an organization the recruits and trains community members to be advocates in court for abused and neglected children who have been removed from their homes, along with Youth Dynamics, which provides mental and behavioral health services to Montana children, are participating in Pinwheels for Prevention.

The annual event sees organizations across the U.S. plant blue pinwheels in the ground to spread awareness.

CASA of Hill County Executive Director Chamene Plum said pinwheels are symbols of happy childhoods and some, sponsored by the Montana Children's Trust Foundation, have already been planted in front of the Hill County Courthouse.

She said more will be placed around the block of St. Jude Thaddeus Church for Blue Sunday, April 25, a day to pray for abused and neglected children and the families that take care of them.

Plum said her organization's advocates, all of whom are volunteers besides her, act a child's advocate in court and are solely interested in the child's well being. She said they spend time one-on-one with the children and put together written reports for the judge in a neglect of abuse case.

"We're kind of the eyes and ears of the judge," she said.

Why is awareness needed?

Plum said child abuse and neglect can take many forms, but the most common in the Hill County area is neglect due to drug use, or as a result of incarceration due to drug use.

While this is the most common, neglect and abuse can also have a number of causes, including outside stressors which the COVID-19 pandemic have almost universally exacerbated.

"I'm sure that (the pandemic) caused more stress," she said. "It caused stress for me for sure... any kind of change like this is going to aggravate and existing stressor."

"Stressors of the pandemic, stressors of not having enough money, stressors of alcoholism... there isn't one thing you can point to and say, 'This is why it happens,'" she said.

Moyra Anthony, Youth Dynamics clinical director for community services and a licensed clinical social worker working out of the organization's administrative office in Billings, said a great deal about the subject of abuse and neglect is not well understood by the public.

Anthony said neglect is far more common than abuse and the neglect is rarely, in her experience, intentional or malicious.

She said while some parents are intentionally abusive or neglectful, most don't set out to be bad parents and communities need to be more open about offering help and normalizing asking for help to prevent these situations.

She said, especially during the pandemic, parents have had to do far more than they normally do to take care of their families, and a simple offer of help can turn a situation around.

Plum expressed similar sentiments and both said people need to be told that it's okay to reach out for help, especially in cases where mental illness is involved.

"We need to normalize parenting and how hard it can be," Plum said.

Anthony said her organizatio, in particular focuses on preventing child removals by addressing neglect and abuse as early as possible for the sake of the child and their family.

She said removing a child from a home, while sometimes necessary for their safety, is invariably an extreme and potentially damaging disruption, and if a way to prevent it exists while addressing the issue and maintaing the child's safety that is going to be better for them in the long run.

"Children don't do well when they are not in their natural home environment regardless of the conditions," she said.

Plum said The Hill County Health Department's Women Infants and Children program for young children and pregnant mothers, as well as the Havre Food Bank, and the Feed My Sheep Soup Kitchen are good resources for food and the District 4 Human Resources and Development Council's Headstart program as well as the Boys & Girls Club of the Hi-Line are also worthwhile to look into.

She also suggested https://parentingmontana.org as a resource for parents trying to do the best for their children.

Anthony said while it may be uncomfortable for people to acknowledge their suspicions, it is very important that they not ignore possible abuse or neglect situations.

"We can't keep our eyes closed," she said.

She said reports of abuse or neglect to hotlines are kept confidential and can prevent further damage to a child's life.

Anthony and Plum said the pandemic has had a huge effect on their respective organizations and made it impossible to meet with children directly for a very long time.

Anthony said the shift to telework was very difficult for her office, and she and her fellow clinicians were deeply affected by feeling that they were no longer as available to their families and children.

"No doubt about it, we've had kids that have regressed because they haven't been able to have that face-to-face interaction," she said.

She said most face-to-face work has been able to resume in the past months as the COVID-19 vaccine has started rolling out, but telework continues on many of Montana's reservations, some of which are still closed to visitors.

Despite the difficulty, Anthony said, she's glad they had access to the technology necessary for telework and she doesn't want to think about what would have happened to the children her organization works with if the pandemic had happened a few decades ago.

She said she and her fellow clinicians are concerned about the possibility of a fourth wave of COVID-19 in the U.S., but if it happens they will adapt better than they did the first time around and they will roll with the punches.

Plum said her advocates had similar problems not being able to visit children in person for a very long time.

She said advocate recruitment has also been very difficult during the pandemic, especially with more and more children needing their services.

She said the organization is looking for new volunteers.

Plum said no experience is needed because CASA can provide all the necessary training over a six-week course with monthly refreshers afterwards. She said they recently made their training accessible virtually as well.

Volunteers need to be at least 21 years old, and able to pass background checks.

Plum said each volunteer is assigned to one family group at a time and cases usually take between 12 to 18 months.

She said the organization is also holding informational sessions April 14 and and 21 about becoming an advocate.

She said anyone interested can go to http://www.CASAofHillCounty.org or call their office 265-6743 x1135.

These items can be dropped off at the CASA Office located at HRDC, 2229 Fifth Ave.

The release said CASA of Hill County's activities can be followed on their Facebook page at https://www.facebook.com/CASAofHillCounty .