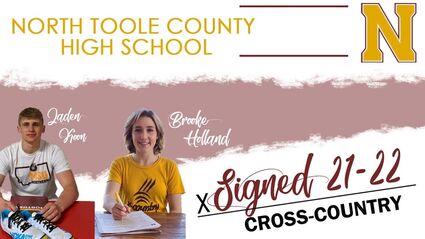 The Montana State University-Northern cross country teams signed a pair of Sunburst standouts to compete for the program starting next fall.

Brooke Holland, a senior at North Toole County High School, has signed her letter of intent to join the women's cross-country team at MSU-Northern in the fall of 2021. In addition to cross country, she has competed in basketball and track throughout her high school career. In cross country, Holland has posted very competitive times since her freshman year. Times she achieved while being a team of one throughout high school.

According to her high school coach, Jeff Nix, racing and training by herself has been challenging for her. Coach Nix thinks she will continue to develop within a larger team environment.

"Based on my communication with Brooke, coach Nix, and friends of Brooke's family, I really expect Brooke to train and compete very well at the college level," Spangler said. "Everything I've learned about this young woman suggests her attitude and drive will make her successful in athletics and academics."

Holland will fit in well at MSU-N as she enjoys the outdoors and playing sports. She has not decided on her major yet, but is excited to see what she can accomplish not only in running but in academics, as well.

"I am ready to put the effort into both," Holland said, adding that she is also excited about the opportunities to experience college sports, to grow closer to her team and to make new relationships.

Brooke is the daughter of Mark and Amanda Holland.

"What I really love about Jaden, is that he has posted some decent times, even though he hasn't yet focused entirely on cross country," Spangler said. "Coach Nix has done a great job training Jaden around football practices and games, but I'm really excited to see what we can do with more consistent training."

"Jaden is an incredibly dedicated young man who is always looking to improve," Nix said. "He is the type of runner that doesn't blink when asked to run in the snow, rain, wind, morning or at night. No matter the Montana weather condition, like Forest Gump he will keep running until you tell him to stop."

"I think Jaden is a great fit for Northern Cross Country, based on my interactions with him and based on my observations of him with the team. I have no doubt he's going to fit in and train hard," Spangler added.

Koon plans to major in business administration and is excited to experience the college atmosphere. Koon's initial goal is run his first 8K race under 30 minutes.

His parents are Don and Stacey Koon.