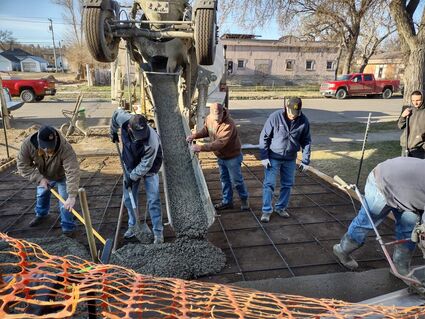 Havre Lions work last Saturday on pouring a new concrete slab at Feed My Sheep Soup Kitchen. The Lions poured half of a new slab in front of the soup kitchen and will go back for another pour to finish it.

Members of the Havre Lions Club were busy last weekend, once again helping with a project at Feed My Sheep Soup Kitchen.

Doug Larson, a member of Lions, said 17 members of the service organization were at the soup kitchen pouring 6 1/2 yards of concrete for a new pad in front of the building.

He said club members Gus Korb of Korb Construction and Steve McLain of McLain Construction brought some equipment they used during the pour, which helped.

"It's a lot easier with the right equipment," Larson said.

Soup Kitchen Director and Cook Doris Hanson said the pad is greatly needed, replacing basically a lawn and sidewalk people would drive over to deliver groceries - which would become a mudhole in the rain.

"It was a mess when we had any moisture," she said.

The pour is being done in two parts, putting half the pad each time, so it is not blocking access to the soup kitchen. Hanson said the next pour will be the boulevard and sidewalk leading up to the handicap access ramp.

She said the concrete was purchased through donations people made to Feed My Sheep.

Larson said Havre Ready Mix gave a discount for the purchase, as well.

He said Lions has done other work at the soup kitchen, including helping replace the flooring in one project and replacing windows in another.

"We're a service organization. 'We serve' is our motto," Larson said. "Doing things for the public."

Hanson said the donation of the labor by the Lions members is very welcome.

"You know, it takes away their time, their family time and weekends, so their donation of labor is greatly appreciated," she said. 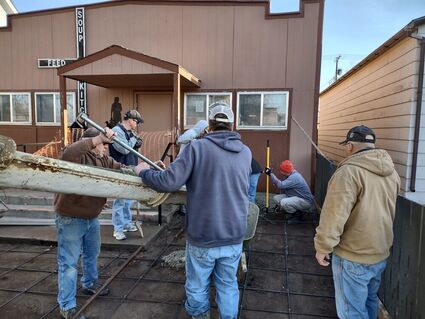