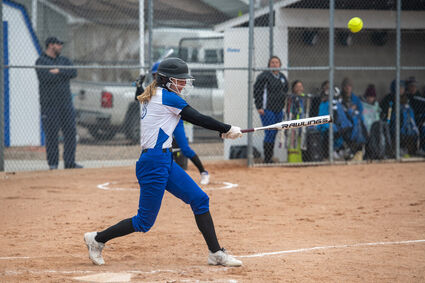 Havre High's Avery Carlson smacks a hit during last Friday's Class A home game against Hardin at the Sixth Avenue Memorial Field. Carslon got the game-ending hit for the Blue Ponies, who also beat Glendive Saturday. Havre is right back at home to host Glasgow this Tuesday.

After a dominant win over Browning Tuesday night to start the week, the Havre High softball team earned two more wins this past weekend to make it three straight wins at the Sixth Avenue Memorial Field.

Friday, they defeated Hardin, 5-4, with a walkoff and then the Blue Ponies opened conference play Saturday afternoon with a 11-1 win over Glendive.

"We played really well. It was nice to get off to a good start," HHS head coach Tony Vigliotti said. "We just need to play some games and get in a rhythm and we were able to do that with three games this week."

The Blue Ponies opened their weekend with a tight win over Hardin. It came down to the bottom of the seventh inning, which saw the Ponies trailing 4-3. With the bases loaded and one out, Avery Carlson hit a single to left field to drive in two runs to win the game.

"I was just trying to keep my weight back. I just had to relax a little bit," Carlson said about her approach to the final at-bat.

The game was scoreless through the first two and a half innings. The scoreless tie was finally broken in the bottom of the third when Paige Parson put down a sacrifice bunt to get Lizzi Haney home to give Havre a 1-0 lead. The lead was short lived as a Pony error in the top of the fourth allowed Hardin to tie the game, 1-1.

Hardin scored again in the top of the fifth with a solo home run to take a 2-1 lead. In the bottom of the sixth, the Ponies responded with a single to right field from Jocelyn Staples that drove in two runs to give Havre a 3-2 lead.

The Ponies looked to close it out in the top of the seventh. Unfortunately, the Ponies gave up a triple with two outs to drive in two runs to take a 5-4 lead. After giving up the lead late in the game, the Ponies were able to gather themselves to win the game.

"They showed some moxy," Vigliotti said. "When they had to dig down deep, they did and hopefully we can continue to do that."

Havre's game Saturday afternoon against Glendive did not have as much drama. After Glendive hit a solo home run in their first at-bat of the game, the Ponies quickly took control in the bottom of the first. A sacrifice fly from Staples tied the game and then an RBI single from Quinn McDonald gave the Ponies the lead. The Ponies then added two more runs to make it 4-1 at the end of the first.

The next couple of innings did not see much action. After giving up a home run in the first at-bat, HHS pitcher Lexi Haney gathered herself to keep Glendive scoreless for the rest of the game.

"I just had to shake it off," Haney said. "You just have to learn to work it back and trust your teammates because it's a team effort."

Staples finished the weekend with five RBIs to lead the team. McDonald and Carlson both had five hits over the two games. McDonald drove in four runs against Glendive and scored four runs herself over the weekend.

"She's going to be solid all the time. She's worked her tail off for four years and you can just count on her," Vigliotti said.

The wins over the weekend improved the Ponies' record to 5-2-1. With the win over Glendive, they also started conference play 1-0. As they move further into the season, the Ponies will continue to rely on their pitching as they improve in other areas of the game.

"With our pitching, it's going to keep us in games so we're going to have to keep doing the same thing," Vigliotti said. "Just keep working at it and keep getting better every day."

Havre will next play Glasgow at home at Sixth Avenue Memorial Field Tuesday at 5 p.m. 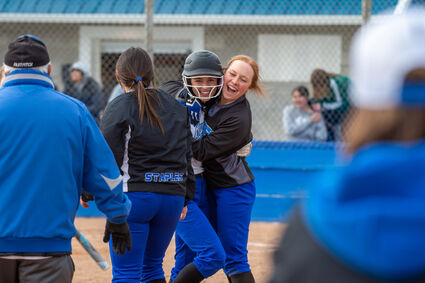 The Blue Ponies celebrate their win over Hardin Friday in Havre.