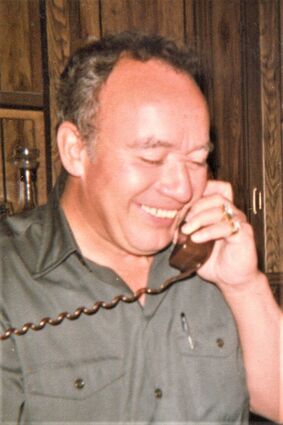 A mass will be held at 11:00 a.m. Friday, April 30, 2021 at St. Jude Thaddeus Catholic Church in Havre. Burial will follow at Highland Cemetery.

The family has asked that memorial donations be made to the Care and Comfort Home in Havre.

Holland and Bonine Funeral Home has been entrusted with services arrangements.

Please visit Jim's online memorial page and leave a message of condolence for his family at http://www.hollandbonine.com .

Ellis James Haney Jr. was born October 29, 1938 in Omaha, Nebraska, to Ellis James Haney Sr. and Virginia (Benson) Haney. Jim was the oldest of four children. He moved with his siblings at a young age to South Dakota to be raised by his grandmother during World War II, when father was drafted to serve in the Army. Upon his father's return from the war, the family moved to Deadwood, South Dakota and started a neon sign shop called "Haneyon." Jim learned the neon sign business with his father and the business was quite successful.

Jim met the love of his life, Shirley Weimer, while attending high school in Deadwood. The two fell head-over-heels in love and were married a short time later, December 1, 1956. The couple had four children and moved to Rapid City, South Dakota, where Jim worked as a sign salesman. A few years later, they moved to Great Falls, Montana, then on to Shelby, where Jim started his own neon sign company called "Montana Sign Company." Shirley and Jim worked together to build the business; Shirley learned how to blow glass and Jim built and sold the signs. Jim was such a smooth-talking salesman, that he could sell almost anything.

The husband-and-wife team were hard-working, creative and built a legacy on the Hi-Line and beyond for over fifty years in the sign business. In the rare times that Jim and Shirley were not working, they enjoyed fishing the rivers and lakes in and around Montana.

Jim was preceded in death by his parents and his loving wife, Shirley Marie.

The family would like to give a special thank-you to Dr. Carley Robertson, Father Daniel Wathen, April Custer and the amazing care givers at the Care and Comfort Home on Fourth Street in Havre.