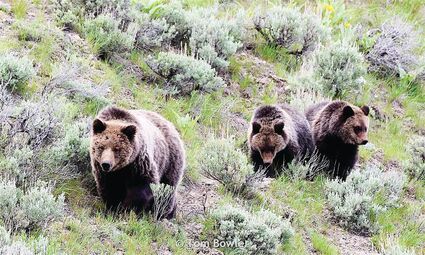 Grizzly bear move down a hillside. With sightings of grizzlies in the area, Montana Fish, Wildlife and Parks is holding a bear awareness meeting Wednesday in Big Sandy.

As grizzly bears move farther out onto the plains, including to this part of north-central Montana, Montana Fish, Wildlife and Parks is holding a bear awareness meeting next week in Big Sandy, near which sightings have been reported.

During the last several years, grizzly bears have been expanding out of their recovery zones including to the prairies east of the Rocky Mountain Front, FWP said in a release announcing the meeting.

"Just recently, a pair of grizzly bears were seen about 15 miles northwest of Big Sandy," FWP said in the release. Although it's not expec...