New books are at the Havre-Hill County Library 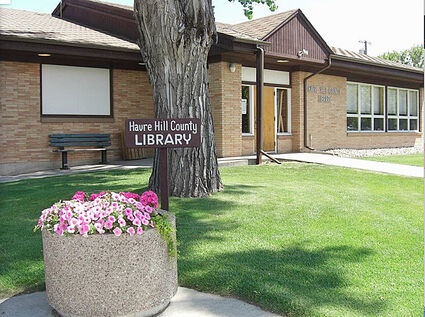 Here are some of our newest titles.

"Project Hail Mary" by Andy Weir. From the author of "The Martian" comes another gripping tale of survival in space. Ryland Grace wakes up to find himself millions of miles from home, with nothing but two corpses for company. As Ryland's memories fuzzily return, he realizes the magnitude of the task that now confronts him. Hurtling through space on a tiny ship, it's up to him to unravel an impossible scientific mystery-and conquer an extinction-level threat to our species. If he fails, humanity and the earth itself will perish. This book will be available after May 4, but holds can be placed on it now.

"Death with a Double Edge" by Anne Perry. As Daniel Pitt investigates the death of a respected colleague, with the help of his close friend Toby Kitteridge, their inquiries lead them to a local brothel and opium den, but also - unexpectedly - to a wealthy shipbuilder crucial to Britain's effort to build up its fleet, which may soon face the fearsome naval might of Germany. His path blocked by officials at every turn, his family receiving threats, Daniel's devotion to justice struggles with that to his family and his nation, as his continues his investigation.

"First Person Singular" by Haruki Murakami. A collection of eight mind-bending short stories, all told in the first person by a classic Murakami narrator. From memories of youth, meditations on music, and an ardent love of baseball, to dreamlike scenarios and invented jazz albums, together these stories challenge the boundaries between our minds and the exterior world. Occasionally, a narrator may or may not be Murakami himself.

"You Love Me" by Caroline Kepnes. Take another trip into the deviant mind of Joe Goldberg, the antisocial but savvy narrator of Kepnes's "You" series. Joe is done with cities. He's ready to embrace nature and simple pleasures on a cozy island in the Pacific Northwest. He gets a job at the local library - after all, he does know a thing or two about books - and that's where he meets her: Mary Kay DiMarco. Librarian. The trouble is, Mary Kay already has a life. She's a mother. She's a friend. She's busy. Maybe with Joe's encouragement, Mary Kay will do the right thing and make room for him.

"The Agitators: Three Friends who Fought for Abolition and Women's Rights," by Dorothy Wickenden. Harriet Tubman was one of the most important conductors of the underground railroad and hid the enslaved men, women, and children she rescued in the basement kitchens of Martha Wright, Quaker mother of seven, and France Seward, wife of Governor, then Senator, then Secretary of State William H. Seward. Beginning two decades before the Civil War - when Harriet was still enslaved and Martha and Frances were two young women bound by law and tradition - and ending two decades after the war, in a radically changed United States, "The Agitators" brings this extraordinary period of history to life through the intimate perspective of these three friends and neighbors.

"The Unreasonable Virtue of Fly Fishing," by Mark Kurlansky. Fly fishing, historian Mark Kurlanksy has found, is a battle of wits, fly fisher vs. fish-and the fly fisher does not always (or often) win. The allure, Kurlanksy learns, is that fly fishing makes catching a fish as difficult as possible. This is an irresistible story of the science, history, art, and culture of the least efficient way to catch a fish.

"The Code Breaker: Jennifer Doudna, Gene Editing, and the Future of the Human Race," by Walter Isaacson. Jennifer Doudna and her collaborators turned a curiosity of nature into an invention that will transform the human race: an easy-to-use tool that can edit DNA. Known as CRISPR, it opened a brave new world of medical miracles and moral questions. After helping to discover CRISPR, Doudna became a leader in wrestling with the moral implications of an invention that gives the human race evolution-hacking powers. With her collaborator, Emmanuelle Charpentier, Doudna won the Novel Prize in 2020. Her story is a thrilling detective story that involves the most profound wonders of nature, from the origins of life to the future of our species.

"Follow Your Arrow" by Jessica Verdi is a modern romance that lives both online and off. What does "internet famous" mean and how does living online affect real world love stories? CeCe is navigating those very public vs. private life questions.

Errol Thebes, he's not dead and he's certainly not safe. Lynne Bertrand's "City of the Uncommon Thief" may be a fitting fantasy read for 2021. What happens in a city that's quarantined from the world? A city that's walled off by mile-high iron towers? A city where nothing uncommon can happen? What happens in this dark fantasy where people are gripped by fear?

Currently being adapted into a Netflix original, "The Girls I've Been" by Tess Sharpe is a page-turning psychological thriller. Nora - or maybe she's Nora - is taken hostage during a bank heist. After playing normal, Nora is confronted with a situation she didn't plan for. How do you escape without a plan?

"Sunday Funday in Koreatown" is a picture book written and illustrated by Aram Kim. Yoomi has big plans for today but nothing seems to be going the way she wants it to. A story about resilience, family, and Korean culture.

"Out of Nowhere" is a picture book written and illustrated by Chris Naylor-Ballesteros. Beetle has a friend: Caterpillar. Every day they shared a picnic. Until one morning Caterpillar was gone. A journey that reveals the power of friendship to endure even the biggest of changes.

"Dear Beast: The Pet Parade" is a graphic novel written by Dori Hillestad and illustrated by Kevan Atteberry. It's time for the annual city pet parade. Simon the cat hates wearing costumes. He decides to let his boy's dog Baxter to march instead. Funny and heartwarming. Celebrates the love of a good pet, the joy of a new friendship, and the fun of writing letters.

"Power Up" is a graphic novel written by Sam Nisson and illustrated by Darnell Johnson. Miles and Rhys know each other only as Gryphon and Backslash in the game Mech Melee. They are an unstoppable team. A real-life wrongdoing blasts their duo into a crater the size of Arction. With life a complete mess and BattleCon just weeks away can the boys play their way back to each other?

"The Mysterious Disappearance of Aidan S." is a chapter book written by David Levithan. Aidan disappeared for six days. Six agonizing days of searches and police and questions and constant vigils. Then, just as suddenly as he vanished, Aidan reappears. Where has he been? The story he tells is simply ... impossible. But it's the story Aidan is sticking to. A rollercoaster ride through truth, reality, fantasy and belief.

"Meltdown: Earthquake, Tsunami, and Nuclear Disaster" in Fukushima is a nonfiction chapter book written by Deirdre Langeland. March 11, 2011, a massive earthquake rocked the northeast coast of Japan. This book tells the harrowing story of the Fukushima power plant disaster, examining the science behind the catastrophe - and the vogue and tenacity of the people who experienced an unprecedented trifecta of destruction.

These books and many more are available at the Havre-Hill County Library. Call us at 265-2123, email us at [email protected], or reach out to us on Facebook, and we can make recommendations for your next read. You can also browse our entire catalog at havrehilllibrary.org. Contactless pickup is available. Our hours are Monday through Friday, 9 a.m. to 6 p.m. And don't forget to check out montanalibrary2go.org for our digital collections of audiobooks and e-books.