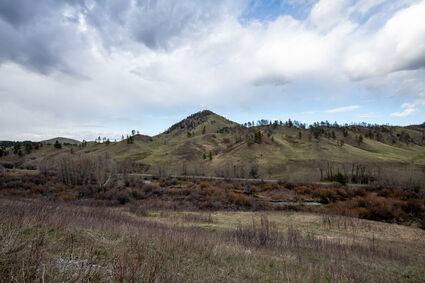 Clouds hang in the sky Monday in Beaver Creek Park. Park Superintendent Chad Edgar said Monday during a Hill County Park Board meeting that park usage is up and it recently saw its busiest weekend of the year.

The Hill County Park Board met Monday evening and discussed a number of issues surrounding Beaver Creek Park, but the most immediate was the need to stabilize the lodge.

Beaver Creek Park Superintendent Chad Edgar said Friends of Beaver Creek Park recently helped pay for an architect and an engineer to come up to look at the lodge to evaluate its stability which has been a concern for some time.

Edgar said they told him the lodge is at risk and he decided to make stabilizing it a top priority, one that will require significant funds to address.

"The fact of the matter is, it's gonna cost some money," he said.

Edgar said Friends of Beaver Creek Park have already raised some money for the project but the engineering and architecture alone is going to cost $13,000, which they have already agreed to cover.

"Thank god for the friends of Beaver Creek Park because this was not in our budget right now," he said.

Board Chair Tony Reum also thanked the organization for its generosity.

Edgar said the architect and engineer recommended that pillars be put underneath every beam to support the lodge.

He said plans are being made to support the structure in the short term while the larger project will likely have to wait until fall.

He also said he's looking into funding methods including finding out what Bear Paw Development Corp. can help with.

Edgar also discussed the construction of the south cross fence. He said he needs a bit more information on the cattle guard that will come with it, but once he has those details he will put the project out to bid.

He also provided his general report to the board and said park usage has increased with the recent good weather and they recently had their busiest weekend yet this year.

He said he's still looking for an assistant superintendent and encouraged anyone 18 and older who thinks they may be qualified to apply.

During the meeting Great Northern Fairground Manager Frank English requested that the board give their blessing to a fundraiser being organized by Ken Erickson on the park to help pay for the construction of a Veterans Memorial Campground there.

Erickson said the fundraiser is set to take place July 9 and 10 and will feature performances by local bands, a corn hole tournament, a raffle and silent auction.

He said they're working with Beta Sigma Phi's Xi Tau Chapter and local veterans clubs and he is looking for military support for the event as well.

He said the event is pretty much set up and ready to go and they are just looking for the board's permission, which was granted unanimously after some questions were asked by its members.

Hill County Commissioner and Park Board member Mark Peterson provided a report on the board's Rules and Regulation Committee, which he said has met twice to gather public opinion on beaver trapping on the park.

He said the committee has recommended to the board that they stick with beaver trapping to control the population for now while the committee devises a long-term plan after the meetings' end.

Peterson said several more meetings remain, with the next one schedule for May 26 from 6 to 9 p.m., where experts representing a number of different organizations will speak on the matter.

He said three speakers have already been lined up, but more will be scheduled before the meeting.

Local resident Lou Hagener asked what getting the population under control means numbers-wise, and Peterson said that's ultimately up to Edgar.

Hagener also talked about a workshop held last week by Hill County Extension about drought and drought management, where some experts detailed an effective drought monitoring method using a 30-year stretch of data to predict and evaluate precipitation levels in any given place.

He said while he didn't quite have 30 years of data on Beaver Creek Park for the model to be effective there, he did do it for Fort Assinniboine.

He said based on the data and what precipitation the area has had so far, Fort Assinniboine will need to have almost 5 inches of precipitation during May and June to have a normal year, and data indicates only a 25 percent chance that that will happen.

Hagener said he's normally skeptical of models like this, but it has a good track record and he said, once enough data is collected, the board could use the model, or a variation of it, for Beaver Creek Park.

The next Park Board meeting will be Monday, June 7, in the Community Building on the Great Northern Fairgrounds. Deadline for agenda items is noon of May 20.