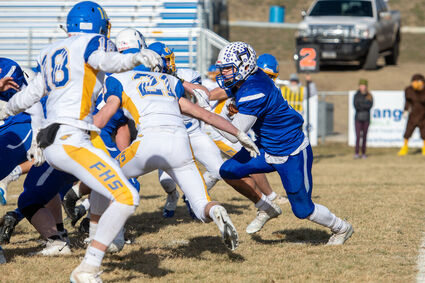 Former Havre Blue Pony Mason Dionne, right, runs against Lewistown in a 2019 Class A playoff game in Havre. That game was Dionne's final game in the town of Havre, as he ultimately headed off to play linebacker at Montana Western. Now however, Dionne has decided to return home, and while he'll trade in Blue Pony Stadium for the new stadium at Montana State University-Northern, he'll be back in familiar territory as he signs with the Lights to begin playing next fall.

After being away from Havre for almost two years, Mason Dionne will return to the Hi-Line as he transfers to Montana State University-Northern from the University of Montana Western to play football for the Lights.

Dionne previously played football at Havre High School, so he is looking forward to his homecoming.

"I am excited. Love the dudes here, I love the coaches here. I think it's going to be great," Dionne said. "Can't wait till the season starts and we win some games."

Dionne decided to transfer because he did not feel like things worked out for him at Western and he missed play...