Police violence discussed by many 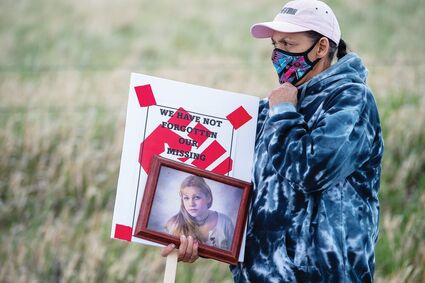 Mary Watson prepares to start walking Wednesday near Laredo Road at the Missing and Murdered Indigenous People Awareness Walk. Watson walked in honor of her sister who was killed two years ago in Rocky Boy's Indian Reservation.

More than 30 people showed up to a Murdered and Missing Indigenous Persons awareness walk Wednesday at Rocky Boy's Indian Reservation, with many attendees having been personally touched by the ongoing issue, as well as by police violence.

The group walked along U.S. Highway 87 from Laredo to the Rocky Boy Indian's Reservation Powwow Grounds near Box Elder, with a law enforcement vehicle escorting the walkers, many holding signs with the red hand used to symbolize the crisis.

Chanal Standing Rock, who works for the Chippewa Cree Wellness Center, organized the walk, which she said she hopes will spread awareness of the issue and draw some media attention, which she and many other attendees say is badly needed.

According to the U.S. Department of Justice, Native Americans account for more than 25 percent of the missing person cases in the state of Montana despite being less than 7 percent of the population.

This disproportionate rate of violence has been attributed to a number of issues, including the historical legal inability of tribes to prosecute on their own reservation when the perpetrator is non-Native, confusion regarding jurisdiction between tribal, state and federal law enforcement, and a lack of resources on the part of tribal police departments, as well as the general economic and social marginalization of Native Americans.

Accurate statistics on missing person cases can be difficult to obtain due to the before-mentioned lack of resources of tribal police departments, as well as frequent errors by non-native police departments, misclassifying Native Americans as another race, and many feel that the issue is not being sufficiently addressed or even payed attention to.

Bringing attention to the problem

Standing Rock said this is the second awareness walk she's done about this issue. The first was in 2019, but because of the pandemic she couldn't do it in 2020.

"Since then, we, as a community, have had 10 if not more murders and missing people," she said.

She said she's been personally affected by the issue when her younger sister was run over and killed in a case that still hasn't been solved.

Standing Rock said she thinks a huge part of the problem is a lack of resources on the part of tribal police department, and she suspected, correctly, that others at the event would say the same.

However, she said, Rocky Boy has recently taken steps to attempt to address the issue by creating a task force. She said the group is still small and more needs to be done, but it is a start.

Standing Rock said another part of this issue is a lack of coverage in the media.

She said many people who need to know about this issue don't due to the lack of coverage, but efforts to raise awareness are still happening.

She cited Jen Buckley, an enrolled member of the Chippewa Cree Tribe and Havre High School graduate, who is putting up billboards around Montana including one in Havre that went up last month to raise awareness about the crisis.

Duane Gopher said it's not just the larger issue that tends to get ignored, but the individual missing person cases that seem to just go nowhere.

Gopher said these cases just don't get the resources devoted to them that cases involving non-Natives do.

"When our people go missing, we don't seem to get any resources to look for them," he said. "There is a gross disparity."

Gopher said he doesn't personally know anyone who has disappeared or been killed, but he's seen the larger issue deeply affect the community and he wanted to show his support.

The walk was more than eight miles in total, and while there was the option for people to start closer to the end of the walk if they felt they couldn't handle the whole thing, an option some chose, many of them walked the full length ending at the Rocky Boy Powwow Grounds where attendees gathered to eat and talk before heading home.

Before beginning the walk Rocky Boy Chairman Harlan Gopher Baker led attendees in a Cree prayer for those who have been lost.

"We walk today in their honor and memory," he said.

Baker remarked on President Joe Biden's declaration of May 5 as Murdered and Missing Indigenous Awareness Day, which he said is a step in the right direction, but it's important that everyone present keep the memories of the thousands of Native Americans who have already been lost.

Many attendees wore red or wore face masks with a red handprint, a symbol of the movement to raise awareness and address the issue, and many held signs with the names of family, friends and loved ones they've lost, asking that their names not be forgotten.

Many of the people present at the walk said they had lost family members who were shot by police under various circumstances which they said has also deeply affected the community and their families.

Tasheena Duran said her brother Cole Stump was killed last year by Billings police officers who were detaining him while investigating suspicious activity.

Duran said the loss of her brother affected her family and the community deeply, as well as all the others lost.

"That one person meant a lot to a lot of people," she said.

Billings Police Department reports say Stump pulled a gun on the officers before they fired, an account corroborated by a witness who also said Stump fired first, but Duran said the department has not transparent enough about the incident and has been resistant to allowing an independent investigation.

Billings Police said it would conduct an investigation which then would be reviewed by the Montana Department of Justice and Yellowstone County Attorney's Office.

Duran said she may be wrong about the situation, but an independent investigation shouldn't be a problem for the department if they didn't do anything wrong.

She said these losses compound the normal difficulties of life and the circumstances many people in her community live in.

"There's already a lot of trauma growing up on the Rez, and this just adds to it," she said.

Another attendee who lost a brother was Cornelia Taylor, who was there in honor of Stonechild "Stoney" Chief Stick, who was shot by police during a Fourth of July celebration in Poulsbo, Washington, in 2019.

The officer in that case was not charged after witnesses testified that Chief Stick lunged at him with a screwdriver in what may have been a mental health crisis.

Like Duran, she said, she's been fighting to have an independent investigation done.

Taylor said incidents like this are a source of tension for many, because the Cree way of thinking about death is generally to let people go and let them rest, but she and many others still desire closure, even if it will not bring their loved ones back.

"If it hasn't happened to you then you don't understand," she said.

Anthony Russette said his best friend Edward Ronald "Edron" Stump was killed by a Yellowstone County sheriff's deputy during an attempt to arrest him. 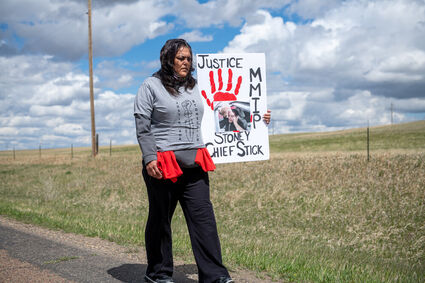 A walker at the Missing and Murdered Indigenous Persons awareness walk on U.S. Highway 87 Tuesday carries a sign in memory of Stonechild "Stoney" Chief Stick.

The deputy in question, Clay Hackbarth, was justified in firing, a six member jury unanimoulsy decided in a mandatory coroner's inquest where they heard from witnesses who corroborated Hackbarth's account that Stump fired a gun at Hackbarth when he announced Stump was under arrest for drinking while on probation for a 2010 felony assault.

Russette said he grew up with Stump, who he said was trying to get better before the incident.

Beyond the matter of his friend however, he said the reservation still has a lot of open wounds that need to be mended.

"We've got missing people in Rocky Boy that have gone unsolved for years," he said. "And I'd just like to see some closure."

He said the issue causes a lot of damage, but he's happy that it also brings people together for events like this, where people can be together and share their stories.