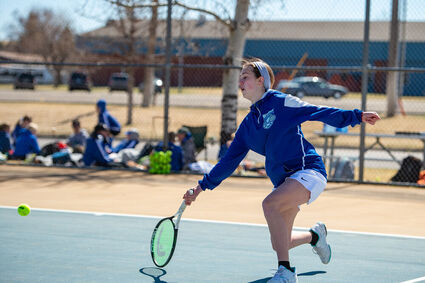 Havre's Kate Hemmer hits a shot during the Havre Invitational tennis tournament last month. Hemmer is a part of a very youthful Havre High girls tennis team, that has been rebuilding this season after two large senior classes graduated and the pandemic canceled the 2020 season. The Pony girls and boys head to the Mayfair Invitational this weekend in Billings.

The Havre High boys tennis program has had a run of success that's hardly been paralleled in Class A tennis, and it spans nearly three decades.

Currently, the Blue Ponies have a 12-year divisional championship winning streak going, and, as the Ponies head to the Mayfair Invitational this weekend, they're gearing up to battle for No. 13.

During that time, the HHS girls program has had its moments, too, however. Blue Pony head coach George Ferguson guided the Ponies to their first-ever girls state championship in 2006, and HHS did it again in 2009. The Ponies have also...