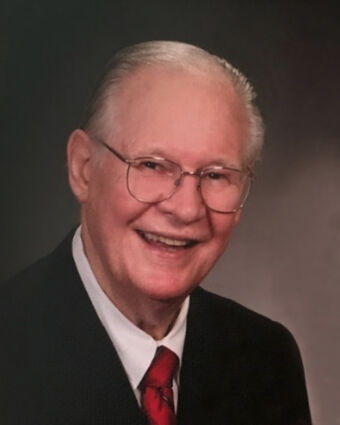 Roald Amund Kindem was born in Northfield, Minnesota, on May 16, 1929, one of eight children born to Ingvald and Anna (Sekse) Kindem. Following his graduation from Northfield High in 1947, Roald enrolled at St. Olaf College, where, as a student-athlete, he majored in history and earned varsity letters in football and track. After receiving a Bachelor of Arts degree from St. Olaf in the spring of 1951, Roald set aside a planned career in coaching when he sensed God calling him to public ministry. He enrolled at Luther Theological Seminary in St. Paul, Minnesota, in the fall of '51.

Following Roald's graduation from Luther Seminary and his ordination in 1955, he served parish calls at First American Lutheran (later Christ Lutheran) in Whitefish, Montana (1955-1957); First Lutheran in Havre, Montana (1957-1966); and Grace Lutheran in Albert Lea, Minnesota (1966-1973). During this time his gifts as a lead pastor in preaching, administration, stewardship, and innovation came to the fore. In 1973 he became Vice President for Public Relations and Development at California Lutheran College (now California Lutheran University) in Thousand Oaks, California. In 1978, Roald became National Director for "Momentum for Mission," a program of The American Lutheran Church (ALC) and moved his family to Apple Valley, Minnesota. In 1980, he became vice president for communication and mission support of the ALC.  In 1986, Roald launched his own stewardship consultation ministry - Stewardship Growth for Congregations - and worked successfully with congregations around the country until his retirement in 2003.

Pastor Kindem served on the national board of the Luther League and was a member of the Board of College Education of The American Lutheran Church. He also served as a board member of Lutheran World Relief and Lutheran Quarterly and was an occasional guest instructor in homiletics at Luther Seminary. In recognition of his contributions to the life of the church, the degree of Doctor of Divinity honoris causa was conferred on the Rev. Kindem by Dana College of Blair, Nebraska, in 1981.

During his final years, Roald became a resident of Arbor Lanes Assisted Living in Burnsville, Minnesota, where he continued his lifelong habit of making connections with those who crossed his path, and closely followed the fortunes of the Minnesota Vikings, of whom he was a lifelong fan and long-time season ticket holder. Though his physical abilities slowly diminished, his mental acuity remained strong to the end, and he enjoyed hearing from family members, friends, and colleagues, and valued the pastoral visits and ministry extended to him. By inaugurating with his wife Shirley, the biennial Kindem Family Reunion tradition in Whitefish, Montana, in 1995, they gave their family a gift that endures to this day.

Roald was preceded in death by his wife of 65 years, Shirley.

Roald was a passionate churchman, looked up to by those he served, valued by his colleagues, admired by many whom he touched, and deeply blessed through his long and fruitful marriage to Shirley and the family life they shared. His spirit lives on in all of our hearts as a life-long example of deep Christian faith, generous stewardship, enthusiasm, perseverance, hopeful vision, and devoted service to Christ's church.

A Memorial Service for family and close friends will be held at Grace Lutheran Church in Apple Valley, Minnesota, on May 26, 2021. Numbers limited due to COVID protocols. Call in advance. Visitation is at 12:30 p.m.; Worship is at 1:00 p.m., followed by the interment of Roald's ashes at Oak Lawn Cemetery, Northfield, Minnesota, for family only.

In lieu of flowers, you are invited to consider a gift to Luther Seminary, Lutheran World Relief, the Good Gifts ministry of the ELCA Hunger Appeal, or the Grace Lutheran Church Mission Fund.