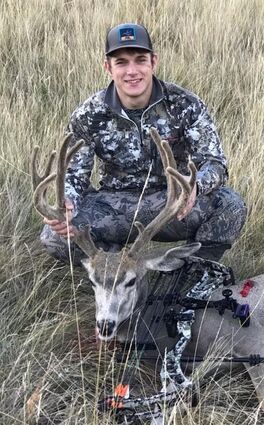 Quinn Jeffrey Whitmus was born on August 14, 2000, in Havre, Montana to Jeff and Donna Whitmus. Quinn passed away on May 7, 2021, in a tragic work-related accident.

Quinn attended school in Havre, Montana, until the sixth grade, when he moved to Wolf Point. He then attended Frontier Elementary until the eighth grade and Wolf Point High School until he graduated in May of 2018.

Quinn excelled academically and in sports at Wolf Point High School. Quinn played football his freshman and sophomore year, then ran cross country his junior and senior year. Quinn pole vaulted in track his sophomore through senior year, where he made it to state his junior year and placed fourth. He made it to state his senior year as well. Quinn started his wrestling career at the age of 5 and continued through college. Quinn started his college career at the University of Mary in Bismarck, North Dakota. After graduation he signed to pole vault at the college, but the love of wrestling ultimately made him make the change to be a college wrestler. Quinn transferred to University of Providence in Great Falls, Montana, to pursue a degree in wildlife biology. At Providence, he met up with numerous lifelong wrestling buddies that convinced him into continuing his wrestling career as an Argo. Quinn loved being an Argo and was very proud to call them his teammates and coaches.

Quinn was also involved in 4-H for 10 years, showing sheep, hogs, and doing woodworking projects. Quinn's real passion was the outdoors. He enjoyed hunting, fishing, and shed hunting with his best canine friends, Buster and Sadie, his father, two sisters, Uncle John and cousin Hunter and Walker. Along with his three wolf pups, Trisetan, Kaholo and Carter. Quinn had his dream job working for Scheels in the Hunting and Fishing Department, along side two awesome co-workers Derek and Doug.

Quinn will always be remembered for his big smile, work ethic, dedication, integrity, honesty and determination in everything he did. Quinn would often say, "If you can't be the best, try not to be the worst."

Quinn is preceded in death by his maternal grandparents, Clyde and Doris Price, best canine friend, Sadie, Uncle Clayton Hornung, Aunt Sally Haack and paternal great-grandparents on both sides of the family.

Cremation has taken place and his ashes will be spread over the Missouri Breaks south of Wolf Point this summer. This is where Quinn spent most of his time, hunting and shed hunting.

In lieu of flowers, memorials can be made in Quinn Whitmus' name to the University of Providence Wrestling Program or to one's choice.