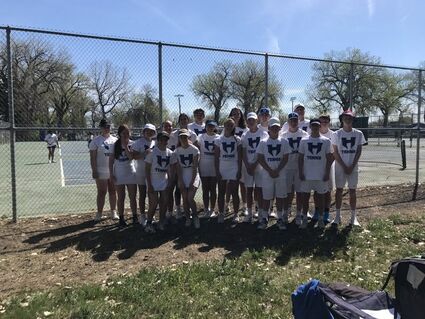 The Havre High boys and girls tennis teams pose for a photo in Miles City Saturday. The Blue Ponies finished the regular season at the Miles City Invitational and will now head to the Northeast A Divisional in Lewistown. The tournament is set for Thursday and Friday but could be moved due to impending bad weather.

The Havre High tennis teams made their longest trip of the season in order to get ready for the upcoming Northeast A Divisional Tournament. The Blue Ponies trekked to Lewistown Friday for the Fergus Invite, then went on to Miles City to play in the Miles City Invite Saturday.

And while it was a long trip, and the Ponies played in more hot weather, HHS head coach George Ferguson said, it was exactly what his teams needed.

"The goal was to play our best tennis of the season, win or lose," Ferguson said. "At times, we did that. We saw a lot of improvement. But I think,...