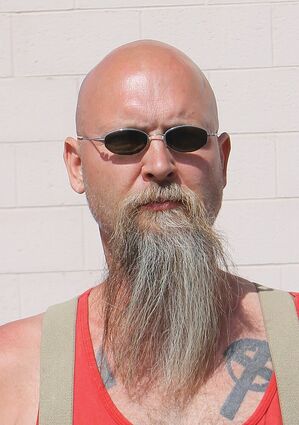 Gabrielsen, 53, is originally from St. Paul, Minn., of Noreweigian descent and was brought up in the Lutheran tradition. This upbringing is what brought his family to Havre.

"My grandparents came directly from Norway. My grandmother never did learn to speak English. Four Gabrielsen brothers came from Norway, they were all ministers, Lutheran ministers," Gabrielsen said.

His father, K. David Gabrielsen, was the minister of First Lutheran Church in Havre.

Tony Gabrielsen said he finished high school in Havre before marrying and briefly returning to Minnesota, then returned to Havre.

"We both realized that this is a perfect town to raise children in. You know, its location, its isolation. The school system here is excellent, the parks system is excellent. The city does such a great job of maintaining everything," he added.

After working manual labor jobs over the course of his life, Gabrielsen, who works for Northern Montana Hospital in maintenance, said he began to feel drawn toward a new calling.

"I think that people that live in certain areas for years and become a certain age or are business people have a civic duty to serve the town in some way. I was great friends with a man named Terry Schend. I'm doing kind of what he was doing. He wanted to get on City Council to affect change. That's what I'm going to try and do," Gabrielsen said.

Schend, who died from cancer in 2011, served six years on the council.

Gabrielsen said this is a learning experience for him as he doesn't have a background in politics but because of his feeling of civic duty, he wants to make Havre a better place.

"I don't know if anything's wrong. I really don't. I think personally, of course, that my street should be nicer, but Public Works has a lot of stuff to do. I'd love to get on City Council so that I can find out what's going on with this town that I love. It has helped me raise five beautiful children who all have graduated from college. What can I give back and how can I help to make it better?". Gabrielsen said.

He said he believes he possesses qualities that would make him a good City Council member, such as 13 years of experience with Havre Day Activity Center as the recycling manager.

"I changed that program from kind of a bunch of garbage laying around essentially in boxes to a program that the people that represented the state ... were bringing other people from other facilities to see what a model recycling center could look like," Gabrielsen said.

Gabrielsen said he employed 17 people with developmental disabilities, three of whom were making $300 a week.

"Now, that doesn't sound like a lot to a lot of people. But to the people that were working for me, that is a lot of money. If you look at other facilities around Montana itself, it was far and away above what people in day programs were making. So I have excellent managerial skills," Gabrielsen said.

He also said he, along with a middle management core, wrote many state-level programs for training people with developmental disabilities to work and live and to use the community to the best of their ability.

"So I have managerial skills, I have people skills, and I have writing skills to write these programs. I'm not sure if that's going to relate, I don't know how much writing I'm going to have to do. Like I said, I don't have any idea. I've never been to a City Council meeting. So, I'm just throwing my hat in the ring, so to speak," Gabrielsen said.

Gabrielsen said having a background outside of politics is a good thing.

"I'm not a politician, I'm just a guy, you know, but I think that that's what America is supposed to be about. People that are just regular people decide that they're going to do something at some point, you know. Terry did, so I'm gonna. My platform, so to speak, would be child care," he added.

Gabrielsen said an issue for him is the area not having enough child care. He said the men and women of Havre providing this service are providing something invaluable, but he feels the situation could be improved.

"I think a commercial day care in Havre, Montana, would be a shining example of ... maybe that would become the wave of the future. You have lots of children in a true training situation before they go to kindergarten, almost like Head Start, but a day care center instead," Gabrielsen said.

He said he does not have a lot of knowledge about the city's various departments, and he will make an effort to step up and educate himself to best-serve the people of Havre.

"All the things that the City Hall does, I have not really paid attention to except for sort of complain about it like a lot of people in Havre do. So, I'm going to stop complaining, I think and go and sit down and listen to what people have to say. ... I'm actually going to make an effort to understand how the city runs, how the people are interacting with each other," Gabrielsen said.