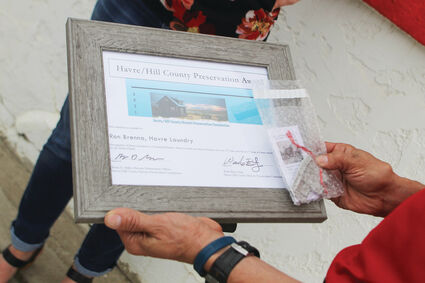 Ron Brenna said the business, which has been in his family since 1942, in the same location where it opened in 1904, looks to stay in the family with Grayson coming back to Havre from college in Iowa, learning the business and preparing to take over.

The business started in 1904 with six partners and one of the partners, Walter MacKenzie, bought out the other partners in 1931.

In 1934, Brenna's grandfather Ralph Sleeter started working for the company and bought it from MacKenzie in 1946.

Numerous family members have worked in the business, including Brenna's father, Neal, who started in the family business in the early 1960s,

Neal Brenna was president from 1976 to 1995, when he retired and Ron Brenna took over the position.

And now the next generation, Grayson Brenna, is learning the business.

Ron Brenna said much of their work now is commercial, reflecting changes in society. At one time, people regularly wore formal clothes, to work, to church, to weddings and so on, and more professional cleaning was needed.

People do more of their own laundry now, and Havre Laundry and Dry Cleaning continues to adapt, as it has for more than a century, he said.

He said it can be difficult to balance expansion with the work force, if they get more business and need more workers will they be able to find them?

Automation can help with that, Brenna said, but the key is the employees, who have stuck with the company including during the COVID-19 pandemic.

"We have a really great crew," Brenna said.

The company has cut its service area down a bit at the moment, cutting back from the northeastern corner of Montana, but is still looking for more business from other areas, as well.

He said the area they serve - they still go as far as the Glasgow area to the east - involves a lot of driving, but that is normal.

He said he is encouraged that other families are continuing their businesses and younger people coming back to work.

"Small towns like this on the Hi-Line, we need to spur it along," Brenna said.

He said Havre Laundry did fairly well during the pandemic, although it slowed a bit, but it will continue and continue to adapt, as it has through recessions and the Depression.

The commission provided the Hill County Courthouse and the Masonic Temple with historic district signs, it said in a press release. The signs are through the Montana Historical Society National Register Sign Program. Both the courthouse and the Masonic Temple are contributing buildings in the Havre Historical Residential District and were eligible. The signs provide a brief history of the building and their importance. Signs will be mounted either on or next to the buildings for display.

After windy spring conditions damaged some of the green Havre Historical Residential District banners, the release said, NorthWestern Energy generously agreed to remove all of the banners around town so they could be cleaned and repaired. Joe Ross of Cavalier's volunteered to stitch and repair the damaged banners. Ross even purchased an exact matching thread at his own expense, the release said. Once the repairs are completed, NorthWestern Energy will rehang the banners.

"The (Havre/Hill County Historic Preservation Commission) would like to extend a huge thank-you to these businesses for their community support," the release said, "This project would not have been successful without their efforts." 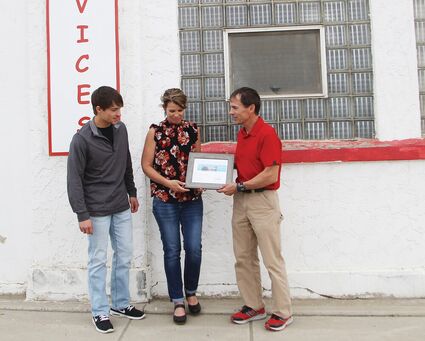 The commission selected St. Jude Thaddeus Catholic Church for the 2020 Christmas Ornament, and the first 100 ornaments sold out within weeks. An additional 150 ornaments were ordered but eventually sold out as well. This was the highest number, most popular ornament, sold in the past 10 years, the release said.

The commission uses the proceeds to support local preservation projects in the community.

The ornament design for 2021 is expected to be selected in August and start going on sale in September.