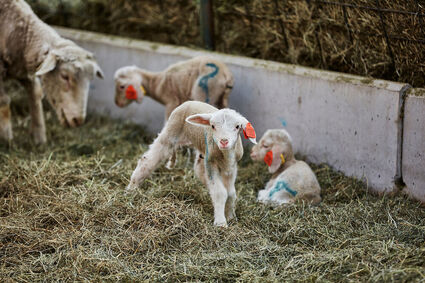 BOZEMAN - Throughout a Montana spring, baby livestock become a welcome feature on the landscape, with both wild and domestic newborns appearing across the state. For the staff at MSU's Red Bluff Research Ranch near Norris, the arrival of springtime means preparing for several hundred new lambs.

Red Bluff, which covers nearly 11,000 acres between Norris and the Madison River, is staffed by ranch foreman Noah Davis, sheep foreman Wyatt Geis and shepherd Raul Franco-Urcos. All three live on the property, which proves useful when the time comes for lambing. Nearly 700 lambs are born over five weeks each spring.

"Usually, we get about a 130 percent lamb crop," Davis said. "We have sets of twins and triplets as well as single lambs, depending largely on the genetics of the sheep."

With almost 600 sheep living permanently at Red Bluff, lambing becomes hectic after the first lambs are born in the beginning of April each year. One of the three men gets up hourly through the night to check the pastured herd for new lambs and ensure any new babies don't get too cold.

Red Bluff's sheep facility includes two dedicated barns for ewes and their lambs after birth. The ranch also houses around 200 head of cattle, which began calving in early May. The facility is used for both teaching and research, constituting the hub of MSU's agricultural sheep research, spearheaded by Brent Roeder of the College of Agriculture's Department of Animal and Range Sciences and an MSU Extension Specialist.

"There's always genetic research going on, since we have four different breeds, looking at how heritable certain traits are and things like that," Davis said. "We're exploring research on mixed-species grazing since we have both sheep and cattle here. What does it mean for the diet of the animals if you graze sheep before cows, or vice versa, or at different times of the year? There's a broad array of topics you can look into."

In addition to leading research efforts, Roeder has published work on the effectiveness of livestock guardian dogs, which are becoming more common with ranchers to mitigate conflicts between livestock and wildlife. Red Bluff also has two new guard dog puppies, large mixes of Kangal and Turkish Boz who were trained by guard dog specialist Steve Skelton, a rancher near Choteau who has used the dogs successfully in grizzly bear country for several years.

But in April, lambing is the No. 1 priority at Red Bluff. The process starts in November, with either artificial insemination or with rams turned out with the 450 ewes of breeding age for around 45 days. The other 150 sheep are known as ewe lambs, yearlings who aren't yet old enough to be bred and kept separate until they turn two years old.

After those 45 days, the rams are then removed to MSU's Fort Ellis Farm in Bozeman, said Davis. The sheep gestation period of around five months leads to the extremely busy lambing weeks for Davis, Geis and Franco-Urcos. As lambs are born, they are taken with their mothers into Red Bluff's lambing barn, where they are kept in pens known as jugs. The smaller, more private space gives mother and lamb an opportunity to bond and for the lambs to begin nursing. Most lambs are on their feet and walking within about 15 minutes of birth, said Geis.

"They'll be in the jugs for between 12 and 24 hours," Geis said. "We dock their tails and tag their ears not long after they're born and record all the information about size and weight and whether we had to assist with the birth or not."

After their time in pairs in the lambing barn, the ewes and lambs are moved into the mixing barn, where they are gradually exposed to larger groups of sheep to give the lambs the opportunity to practice finding and following their mothers. After several days in the mixing barn, they move into pastures and finally onto Red Bluff's rangeland acres. When the next spring arrives, the entire herd will be sheared and a sample of each fleece taken to MSU's Wool Lab - one of just a pair of labs of its kind in the nation - to continue ongoing research in wool quality and the variables that influence it.

By the time that shearing takes place, this year's lambs will be yearlings and almost ready for breeding themselves.

"Then the process starts all over again," Davis said.