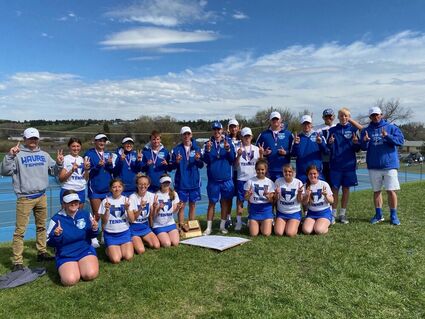 The Havre High boys and girls tennis teams pose for a photo after finishing the Northeast A Divisional tournament Wednesday in Lewistown. Havre advanced seven netters to next week's Class A state tourney in Billings.

With his youngest boys and girls tennis teams in his 19 years of coaching, and on just two days rest, Havre High head tennis coach George Ferguson said just about anything could have happened at the first-ever Northeast A Divisional Tournament.

In the end though, what happened was, Ferguson’s Blue Ponies did what he thought they would — succeed. And that success included the HHS boys winning their 12th straight divisional championship and the 19th in the last 20 seasons. The young Havre High girls also had some strong moments, as the Ponies finished with 16 points in a season when all...