American Legion Post 11 to honor veterans throughout the weekend 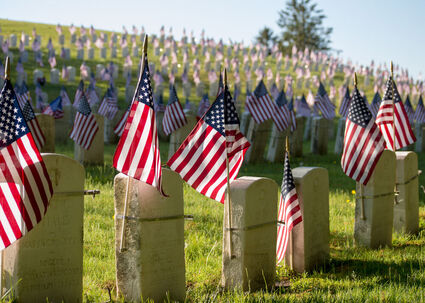 Editor's note: This version corrects the start of the ceremonies at Hill County Courthouse Monday.

Havre's American Legion Post 11 has scheduled a packed weekend of events in observance of Memorial Day.

The Legion Riders will then be sponsoring a poker run starting at 9 a.m. at the former IGA parking lot on First Street West. Johnson said the route will span from Havre to Chester to Fort Benton and back to Havre including five stops. The route will end at Vizsla Brewing.

Sunday, Johnson said, Havre's Veterans of Foreign Wars Post 497 will be placing flags at the grave sites of veterans at Highland Cemetery.

As for Memorial Day itself, a service at the Hill County Courthouse will begin at 11 a.m. The service will include an invocation, an American flag ceremony by local Boy Scouts, a reading of last year's deceased veterans, a laying of wreaths and a benediction. This will be followed by a 21-gun salute at Highland Cemetery.

Following the 21-gun salute, there will also be a short ceremony at the Havre Elks Lodge on Second Street. This ceremony will include a posting of colors by the Honor Guard, the Pledge of Allegiance, Memorial Day and POW-MIA speeches and an Elks flag ceremony followed by a free-will offering lunch.

Lunch will include chili, chicken soup, buns and dessert.

The American Legion and VFW auxiliaries will also be helping with these efforts.

Johnson, who served in the military in the 1970s, said being able to put on this annual tradition brings him great fulfillment.

"It means quite a bit to me, my wife and I both. My wife's in American Legion Auxiliary," he said. "We've helped a few veterans that have had problems here in town, trying to get them back on their feet. It's nice to be able to see them get back to where they're supposed to be and just just serving others, through a group like this is very satisfying."