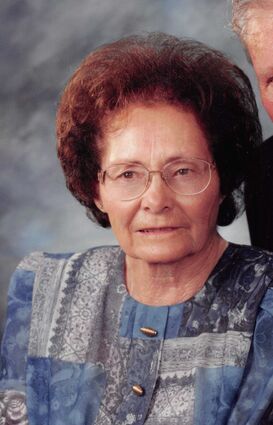 Martha Frances (Pester) Kiemele, known to many as "Chetto," passed away peacefully at Northern Montana Care Center on Monday May 31, 2021, at the age of 95.

Martha was born December 27, 1925, to Thomas and Christina (Spinler) Pester on the family farm north of Hingham. She attended school in Hingham and moved to Havre at age 17, to be a caretaker to a woman in her home. As fate would have it, her caretaking job was next door to Fred and Margret Kiemele, her future in-laws. Years later, she married Alfred Kiemele on February 3, 1949, at the Sixth Avenue Christian Church.

Al and Martha made their home 5 miles west of Laredo, where they farmed and ranched. Together they raised wheat, barley, cattle, turkeys, chickens, horses, and, most importantly, three children Diane, Ken, and Colleen. Martha had a deep love for the land and animals, which she shared with many. Martha had an enormous garden and was known as the "Cucumber Queen." She enjoyed all aspects of her children from clubs, sports, and their education. All three of her children, as well some of her grandchildren, attended the University of Montana in Missoula. In her later years, Alfred and Martha enjoyed retirement in Mesa, Arizona, golfing and enjoying their friends. They traveled around the United States and the world. She said the best place that she visited was New Zealand, with the Panama Canal as a close second.

Martha's greatest achievement was her caregiving skills. Being the oldest daughter, she started early, and never stopped. Not only did she raise three wonderful children, but she also played a key role in other area children's lives. As she aged, she took great pride in her grandchildren and great-grandchildren's lives. When her oldest great-grandson Nate was 6 months old, she was giving out cheetos, and "Grandma Chetto" was born. From that time forward, she became known to everyone as "Grandma Chetto." You could often find neighborhood children at her house, even into her 90's, as everyone knew Grandma Chetto! Chetto led an extraordinary life over the past century. She saw things that many of us will never experience from the dust bowl and all the way to the time of COVID-19. What she said she experienced over her lifetime was incredible, even surviving COVID-19 and a year of quarantine. She loved her Creator and Savior and was proud to be a member of the Sixth and Fifth Avenue Christian Church.

She is survived by her three children, Ken (Linda) Kiemele of Havre, Diane Rampelberg of Kuna, Idaho, and Colleen (Tom) Toman of Missoula; grandchildren, Cathy, Cindy, Thomas, Natalie, Stephanie, and Matt; great-grandchildren, Nate, Mason, Tyson, Macy, and Fiona; sister, Rosemary Murphy, and sisters-in-law Millie and Maryle Lynn Pester. Finally, she is survived by the incredible staff that cared for her over the past 24 months at Northern Montana Care Center.

Chetto was one of the best and will be greatly missed by all that had the pleasure to know her.

Her family has suggested memorial donations be made in Martha's memory to the Fifth Avenue Christian Church.

Holland & Bonine Funeral Home has been entrusted with services and arrangements, and services are pending

Please visit Chetto's online memorial page and leave a message of condolence for her family at http://www.hollandbonine.com .