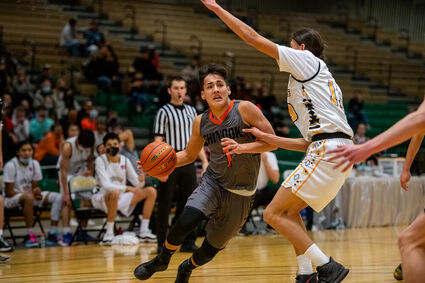 Chinook's Ethan Bell drives against Heart Butte in the Northern C Divisional in February. Bell will next play at Miles City Community College.

Chinook's star basketball player Ethan Bell will continue his basketball career after signing his letter of intent to play for the Miles City Community College men's basketball team. He decided to play for the Pioneers not only because he believes they are a strong program, but also because they can also help each other improve.

"I chose Miles because I felt it was the right fit for me as a player and I love the environment," Bell said in a press release from the school. "They have a great program and I believe I can help them improve."

The 6-foot guard had a stellar career for the Sugarbeeters that got Miles City's attention. Over his four years on the Chinook basketball team, Bell scored 1,164 career points and was named to the Class C all-state team twice. He helped his team win two District 9C championships and achieve a record of 82-16.

He ended his career on a strong note as he averaged 22 points, five assists and three rebounds his senior year. He shot 58 percent from the field, 41 percent from the three-point line and 78 percent from the free-throw line. He and the Sugarbeeters also won the Northern C Divisional consolation game over Heart Butte this past season.

The Pioneers hope Bell will make an impact to improve their program. Miles City went 13-10 last season with a 12-9 record in the NJCAA Region IX conference.

Bell will join a squad that has been coached by Chase Tait for the past 13 years. During his tenure at Miles City, Tait has won the Region IX coach of the year and has led the Pioneers to North Sub-Region IX Championship in 2012 and two appearances in the Region IX Final 4 in 2012 and 2016. With this resume, Bell believes Tait can help him elevate his game to the next level.

"Coach Tait is a great coach and he will help me continue to improve as a basketball player and continue to have a great career," Bell said in the press release.

At MCCC, Bell will major in physical education. He will begin his athletic career when Miles City returns to play this fall.