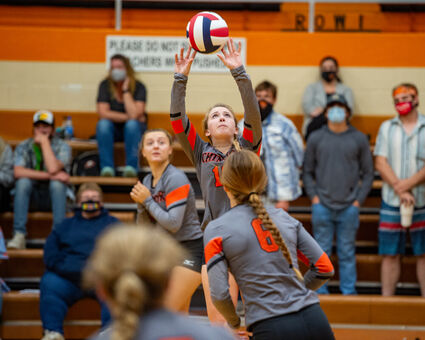 Chinook's Ginger Hauer sets the ball against Big Sandy last year. She will next play volleyball for Dickinson State University.

Chinook's Ginger Hauer will get the opportunity to continue her volleyball career in college as she has signed her letter of intent with Dickinson State University in North Dakota. Hauer played setter during her high school career and will continue to do so at Dickinson. As the setter for Chinook, she led their offense which led to her recording 164 assists in her senior season. In her final season as a Sugarbeeter, the 5-foot-3 setter helped Chinook go 11-3 and 9-3 in conference play. After they wrapped up their postseason, Hauer was named to the Northern C All-State team.