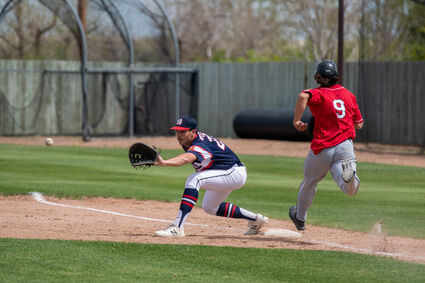 Havre's Ethan Carlson plays first base in a recent game against Glasgow. After traveling to the Gallatin Valley Tournament last weekend, the Northstars are in Glasgow for one nine-inning game against the Reds Tuesday.

The Havre Northstars American Legion baseball club is now fully into the summer stretch. And the Northstars got plenty of games in the sun this past weekend in Three Forks.

Havre not only played a ton of innings at the Gallatin Valley Tournament, but the Northstars, of head coach Patch Wirtzberger, also played some tough competition as well.

Last Friday, the Northstars opened the GV Tournament with an exciting 8-7 win over the Bitterroot Red Sox. It was the first win for the Havre over a Bitterroot powerhouse in some time, and the Northstars did it with a four-hit day from senior Eli Cloning, who had three singles and a double. Havre tallied 13 hits in the game, with Brody Nanini, Carson Lunak and Caden Jenkins all having multiple hit games, while Cloninger had a pair of RBIs as well. Tarek Shipp started the game for Havre, and Nanini pitched the last five innings, as the duo combined for three strikeouts. The Northstars won the game on a walkout, scoring a run in the bottom of the seventh to bear a 7-7 tie.

Friday also saw the Northstars lose a tough one to the Cody Cubs 15-3. Cloninger was on the mound for the Northstars, while Kale Reno, Kale VanCampen, Cloning, Jenkins, Nanini and Trenton Maloughney all had hits in the loss.

Saturday, Havre returned to the diamond where the Northstars lost a pair of close calls. First, Havre fell to the Dillon Cubs, 6-5, as a seventh-inning rally fell just short for Havre. Jenkins, Cloninger, Nanini and Ethan Carlson each had two hits for Havre, which belted out 10 hits overall. Jenkins had a double and a triple, while VanCampen had two doubles, and Nanini drove in two runs. On the bump, Jevin Jenkins took the loss for Havre, while Reno had four strikeouts.

Havre would fall in another heartbreaker Saturday, losing to the Gallatin Valley Outlaws 6-5. In that game, the Northstars jumped out to a 4-1 lead after the first inning, and led 5-2 in the bottom of the sixth, only to see GVO come back and score four runs in the sixth to take the win away from Havre.

Cloninger led Havre with three hits, while Caden Jenkins had two, including a triple. Tavish McLean had a double as well. Trenton Maloughney went the distance on the mound for Havre in the tough loss.

The Northstars then wrapped up the Gallatin Valley tourney with a non-conference game against Lewistown Sunday.

In a back-and-forth battle, the Redbirds scored two runs in the bottom of the sixth to break an 8-8 tie and beat Havre 10-8. The Northstars did have 12 hits, led by a 4-for-5 performance from Carlson and three hits by Cloninger.

Havre has another busy week coming up. The Northstars travel to Glasgow for a non-conference, nine-inning game on Tuesday night, before tripping to Lewistown this weekend for five more tournament games. The Northstars are in the midst of a long road trip with their next home games not coming until the beginning of July. However, they do host thi syear's Class A state tournament at Legion Field.