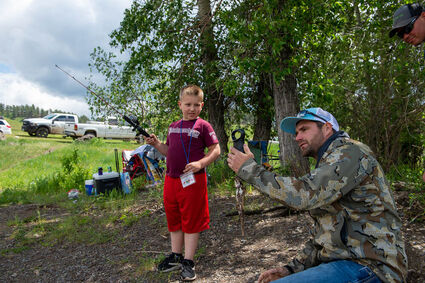 Casey Miles, age 7 gets his sucker fish weighed by Jeremy Hofer. He caught a brown trout right after that catch.

A large number of children and their families braved cool, windy and even rainy weather during the early part of the Havre Rotary Club's Father's Day Fishing Derby, though the sun was out by the end of the derby.

The Rotarians said 36 boys and 30 girls signed up for the derby, which is coming back after being canceled due to COVID-19 last year.

Rotarian Dawn Ward said, with the derby being canceled last year, the club thought numbers might be down, but attendance in the mid-60s is about average for the previous few years.

As the derby progressed, of...