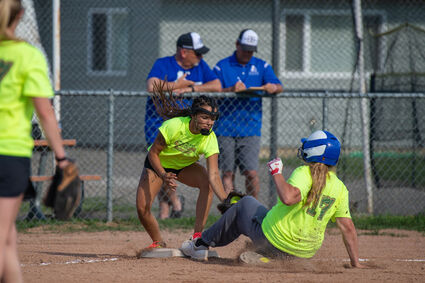 A Havre High softball alumni tags another HHS alumni in the HHS alumni game last year at Sixth Avenue Memorial Field. The HHS Alumni Games will be held tonight and the Shaina Evans Memorial Fastpitch Softball Tournament will be held Saturday and Sunday.

Even though the Havre High softball team finished its season back in May, the Havre community will get another chance to check out Blue Pony softball this weekend with a pair of HHS alumni games tonight at Sixth Avenue Memorial Field. Fans will also get the chance for even more softball at the same field this weekend as men's teams will play in the seventh annual Shaina Evans Memorial Fastpitch tournament.

The alumni game and men's softball tournament will serve as a fundraiser in honor of Shaina Evans, a former Montana State University-Northern volleyball player who passed away in a tragic car accident. The funds from this weekend will go towards supporting the HHS softball program and towards a scholarship for a MSU-N volleyball player.

More than 20 former Ponies have signed up to play in the alumni games. Kaci Hipple, who played on the first HHS softball team in 2004, will participate in tonight's games. Other alumni playing in the game include Kelsey Ward, Carly Danielson. Paige Henderson and Davee MacLeod. Most of the graduated seniors from the HHS 2021 class will also play for the alumni team tonight.

The Ponies team the alumni will face in the second game of the day will have most of the program's current players participating. However, the current team will not be at full strength as some of their players are involved in other sports such as volleyball and basketball for the summer.

HHS softball head coach Tony Vigliotti had a hand in creating the game between the alumni and current Ponies team when he took over the program four years ago. Not only did he want the alumni to have a chance to remain connected to the current program, but he also thought this game would allow current Ponies to learn from their predecessors.

"It's just something to bridge the gap and keep those alumni involved in the program and let our current Blue Ponies play a game in the summer and meet and get to know some of those girls that have been through the program," Vigliotti said. "It's just an overall good thing I think for the program to keep everybody connected and I think that helps your program down the road."

The men's slate of the weekend will then begin on Friday night and run Saturday and end on Sunday. The men's fastpitch tournament will be a double-elimination bracket.

Five teams will play in this weekend's tournament. The first game will start on Saturday at 9 a.m. between teams sponsored by Valley Furniture and Master Sports. The winner of that game will advance to play against the Koefod Insurance team later on that day. The loser will be sent to the loser's bracket. The second game on Saturday will start at 11 a.m. with a matchup between the Gallery Lounge team and the Havre Chiropractic team. Throughout the rest of Saturday, there will be games at 1 p.m., 4 p.m., 6 p.m. and 8 p.m. There will be another game on Sunday morning at 10 a.m. before the championship at noon. If the undefeated team loses the championship game, they will play again at 2 p.m. to decide who wins the tournament.

The weekend will kick off tonight at 5:30 p.m. with the alumni vs. alumni game at Sixth Avenue Memorial Field.