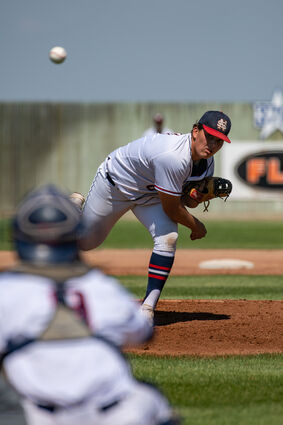 The result of Sunday's game had been an unfamiliar sight for the Havre Northstars American Legion baseball club for the past three weeks. In the championship game of the Bitterroot Bucs Invite in Florence, Havre lost to the Lewistown Redbirds, 5-2. While the tournament ended on a sour note for Havre, it should not distract from how well the Northstars had been playing to stretch their winning streak to 15 games before Sunday's loss.

"It takes a special group to come together and do something like that. So proud of them for staying focused and doing what they needed to do," Havre head coach Patch Wirtzberger said. "When the hitting wasn't necessarily good, it was our pitching and our defense that picked them up. When our pitching and defense wasn't good, it was our bats picking them up. Special teams can do that so hopefully it's something that we can build off."

After this past weekend, the Northstars' record is now 27-11. Havre qualified for Sunday's championship by going 4-0 in the Bitteroots Buc Invite from Thursday through Friday. The Northstars started the tournament with a game against the Moscow Blue Devils from Idaho. While it took a few innings to get their offense going, Havre got it going at the plate to win 5-2.

After a few scoreless innings, the Northstars took the lead in the top of the fourth inning with an RBI double from Trenton Maloughney. In the top of the fifth, a sacrifice fly from Eli Cloninger got another Havre runner home. Later in the inning, Brody Nanini hit a three-run home run to left field to give Havre a 5-0 lead.

The Devils scored a pair of runs in the bottom of the seventh but starting pitcher Kale Reno limited Moscow's offense. He pitched all seven innings where he struck out four batters and allowed two earned runs, eight hits and one walk.

"That was the most complete game he's had all year long," Wirtzberger said about Reno's pitching performance. "He spotted his fast ball really well. He used his off speed pitches at great counts and he kept the hitters off balance for a really long time."

Havre continued to roll later Thursday night against the tournament's host team the Bitterroot Bucs. While the Northstars struggled to score the final few innings of the game, their offense had built them a strong lead early on to hold on for the 7-5 win.

In the top of the first, Havre took the lead when the Bitterroot pitcher walked Maloughney with the bases loaded. A sacrifice fly from Carson Lunak then pushed their lead to 2-0. Bitterroot quickly responded in the bottom of the first with a run of their own to cut Havre's lead to one run.

The Northstars' offense exploded at the plate in the top of the second to extend their lead to 7-1. Caden Jenkins got the scoring going with an RBI single to right field. Cloninger followed him up with an RBI single of his own. Later in the inning, Jenkins scored on a Bucs error. Maloughney finished the inning with an RBI double to center field that drove in another pair of runs.

Friday morning, the Northstars played against the Bitterroot Bucs B team which consisted of their younger players. Since they were going up against an inexperienced team, Wirtzberger thought it was a good opportunity to get his own younger players on the field and give his starters some rest. Even though the Northstars' lineup was different, their winning ways continued as they defeated the Bucs B team 11-2.

Havre's youngsters got the offense going in the top of the first. The scoring started with a sacrifice fly from Theron Peterson to get a runner home. Later in the inning, Kale VanCampen and Conner McKay hit back-to-back RBI singles to push Havre's lead to 3-0. After the Bucs scored in the bottom of the first, Havre made their lead 4-1 in the top of the second when Tavish McLean hit an RBI single to center field.

Over the next few innings, Havre struggled to score but so did the Bucs. Havre got the offense going again in the top of the sixth with another three runs. Drake Berreth got a runner home with a sacrifice fly before a VanCampen single got another two runners.

Even though the Northstars had a 7-2 lead heading into the final inning, they made sure to put more cushion between them and the Bucs. Jayce Jensen got it started with an RBI single and then scored himself on a wild pitch to make Havre's lead 9-2. A few at-bats later, McLean grounded out into a fielder's choice to get another runner home. Peterson scored the last run of the game when he reached home off a Bucs error.

Along with a strong offensive performance, the Northstars saw a solid pitching performance from Lane Kinsella. He pitched the entire game where he allowed no earned runs, six hits and two walks while striking out five batters.

"Lane was locked in and he just threw a lot of strikes and let his defense go to work," Wirtzberger said.

Saturday was no different for the Northstars as they defeated the Libby Lodgers, 13-2, to extend their winning streak to 15 games. Havre again took a lead early by scoring seven total runs in the first two innings.

Nanini started the game off with a bang with a two-run home run to left field in the top of the first. After Libby scored in the bottom of the first to cut Havre's lead to 2-1, the Northstars responded by scoring five runs in the top of the second. After a single to start the inning, McKay stole home to give Havre a 3-1 lead. Later in the second, Cloninger scored on a wild pitch to further extend Havre's lead. The Northstars then got three straight hits from Maloughney, Peterson and McLean to drive in three more runs.

The Northstar offense slowed down over the next few innings but still scored a pair of runs to build a 9-2 lead heading into the sixth inning. Havre again had an explosive inning in the top of the sixth with another four runs to give them an 11-run lead to end the game early.

Havre's winning streak finally came to an end Sunday afternoon where they lost 5-2 to the Lewistown Redbirds in the tournament championship game. Lewistown struck early in the top of the first by capitalizing on Havre's mistakes as two Lewistown runners scored on wild pitches to get a 2-0 lead.

The Northstars responded in the bottom of the first when Ethan Carlson hit an RBI single to center field to cut Havre's deficit to one run. Havre then tied the game in the bottom of the second when McLean singled to right field to get another runner home. However, those were the only two runs of the game for Havre.

"Their pitchers were good. They were spotting up on good pitches that we really couldn't do much with," Wirtzberger said. "When we did hit the ball hard, it seemed like it was right at guys."

Lewistown retook the lead in the top of the fifth thanks to an RBI single from Nolan Fry that got two runners home for the 4-2 lead. Lewistown extended their lead to 5-2 in the top of the sixth with an RBI single from Taylor Smith. The Northstars tried to come back in the bottom of the seventh by getting two men on base but their final batter struck out to end the game.

After their loss in the championship game, Wirtzberger and the Northstars are looking to start another winning streak with just a few weeks left in the regular season. Despite Sunday's loss, he believes their performance this past weekend demonstrates that no team is too much for them as long as they are playing their best.

"They can play with and beat anybody in the state," Wirtzberger said. "Hopefully we can keep building on the good things and then work on the things that we didn't do so well so we can pick it up and be ready for the postseason here in a couple of weeks."

The Havre Northstars will next play Tuesday in Conrad in a doubleheader against the Tri County Cardinals starting at 3 p.m.