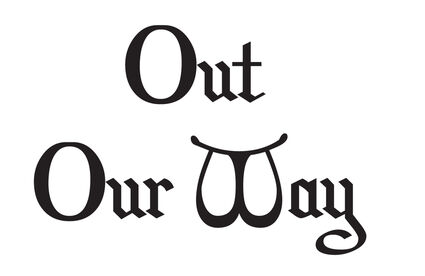 Out our way, we get some interesting weather. Folks unfamiliar with the Hi-Line are often dismayed at the infamous "Alberta Clippers" and the terrible droughts that sometimes hang on for weeks and even months. "How do you survive it?" they ask. " Faith, hope, and a good sense of history," we reply.

This area has been the central buffalo range for millions of years and all the things came and went then as they do today. For there is a power greater than the "Clipper" of the drought that manages to restore balance even after the worst of times. It is the same power that regrows the grass after a prairie fire and causes the pasture to come back more lush and vibrant than before. Agnostics call it "nature;" believers call it nature's God and ours.

In our present times, we feel cultural "droughts and blizzards" as division and hatred is being sewn and applauded by so many in power these days and openly embraced by multitudes of gullible folks who go along. But this is part of the cycle. As has been often noted before, "those who ignore or are ignorant of history are doomed to repeat it," and plainly, there are quite a few ignorant people calling the shots and leading equally ignorant folks down old trails that have always led to destruction and tyranny. George Orwell's famous books "Animal Farm" and "1984" described it all and history has confirmed his observations as we review the past under Hitler, Stalin, Mao etc. Orwell nailed it. Today we see those same patterns dominating pop culture and demanding to create a "new norm" by following an old and failed one. And, as in the past, the corrupt, ignorant and gullible easily fall into the trap. Pushback occurs and another equally ignorant, corrupt and gullible force is created. Division, hatred and eventual clashes break out. It has happened before and it is happening now. The era of "Clippers and drought" is upon us again.

But though the "Clippers" and drought come, so do chinooks and rainfall. Paul reminded believers in the Ephesians passage that God is in charge - and though there is constant opposition and resistance to the Kingdom of God, it will eventually overcome the kingdoms of this world, (Revelation 11:15). We, in the midst of the "Clippers" and drought of the percent time, must hold onto both the history that shows these will not last nor control us and to the prophecy that has thus shown itself to be true - that chinooks and rain are also in the future .

How do we survive? "Faith, hope and a good sense of history." We know of the "Clippers" and the drought. But we also know of the chinook and the rainfall.