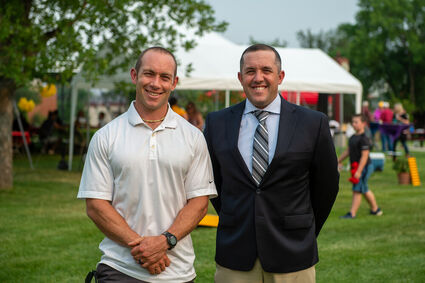 Marc, left, and Kyle Samson were inducted into the Montana State University-Northern Athletics Hall of Fame in an outdoor ceremony at the MSU-N campus on Wednesday night. The Samson brothers led the MSU-N football team to a berth in the NAIA playoffs in 2006.

Brothers, Kyle and Marc Samson made history for the Montana State University-Northern football program, leading the team to the NAIA playoffs in 2006.

Over a decade later, they were recognized for their historic contributions to the program and to the school as they were inducted into the Northern Athletics Hall of Fame Wednesday night in an outdoor ceremony on the MSU-N campus.

And they entered the hall of fame the same way they led the Lights all those years ago - as brothers.