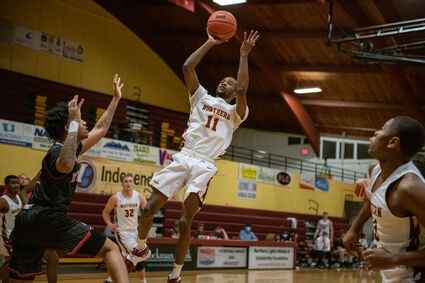 After COVID altered college basketball last season, Mascio McCadney and the Montana State University-Northern Lights have a much more normal looking schedule this winter. The Lights are slated to open the season Oct. 26 against Dickinson State.

Like all college sports teams, there's no question the Montana State University-Northern men's basketball team will be excited for some sort of return to normal this winter.

Of course, the return of fans to the Armory Gymnasium will be a huge part of returning to normal as all Frontier basketball games were played without fans this past season. But, with the release of Northern's 2021-22 hoops schedule, longtime head coach Shawn Huse' team will look forward to more normalcy, in the way of playing non-conference games again, and a return to a somewhat more traditional Frontier schedule - although there will be changes there, too.

Last season, the Frontier played a conference-only schedule in which teams played the same squad on back-to-back days, with games on Saturday nights and Sunday afternoons. That schedule was designed to cut back on travel during the pandemic. Now though, the league will go to a fewer-game schedule, where teams play each other just three times this season, with all game on Thursday nights and Saturday afternoons. All gamer times for men will be 7 p.m. and 4 p.m.

As for the league schedule itself, Northern will open conference play with the pair of traditional December games, starting with Carroll College Dec. 2 and Providence Dec. 4. Conference play starts for good Jan. 6 when the Lights head to Billings to face Rocky Mountain College, followed by a Jan. 8 trip to Dillon to battle Montana Western. The Lights then have four straight at home, with Montana Tech Jan. 13, Carroll Jan. 15, Providence Jan. 20 and Rocky Jan. 22 all in the Armory. The Lights then close out January with games at Western Jan. 27 and Tech Jan. 20.

MSU-N remains on the road to start February with a trip to Carroll Feb. 3 and Providence Feb. 5. The Lights then play their final two home games as they take on Rocky Feb. 10 and Western Feb. 12 before finishing the regular season Feb. 19 at Tech.

Before league play begins, the Lights will build up to the rigors of the Frontier with an ambitious non-conference schedule. Because of COVID, teams did not play non-conference games last season, so getting back to a full schedule will be exciting for Huse and the Lights.

Northern is slated to tip its season off against arch rival Dickinson State Oct. 26 in Havre, before heading out to Michigan for games against Rochester, Dearborn College and Siena Heights Nov. 4-7. That will be an exciting trip for the Lights, who have had several players from the Michigan area in recent seasons, including star guard Mascio McCadney. The Lights will then come home to host Yellowstone Christian Nov. 11-12 before traveling to Dickinson, North Dakota, for a rematch with the Blue Hawks Nov. 14. MSU-N also faces Northwest University Nov. 19 in Great Falls.

The final two games of November could be big ones for the Lights, who will play Our Lady of the Lake Nov. 20 and potentially, The Masters Nov. 26. Both are always strong NAIA programs. In December, the Lights will also travel to Chandler, Arizona, for games against Ottawa University, Embry-Riddle and Arizona Christian. ACU was ranked fifth in the final NAIA Coaches Poll, and is always a powerhouse in the NAIA west. The Lights will then wrap up non-conference play with home games Dec. 29-31 against Ambrose University, Saint Mary's University and an exhibition game against Lakeland College, all in the Armory.

Huse also pointed out that, the schedule is subject to change, as has been the case in dealing with scheduling during this pandemic. Still, the schedule is a really good one for the Lights, who went 8-12 overall last year with a trip to the Frontier semifinals.

And speaking of the postseason, that will begin Feb. 22 as the Frontier playoffs will run through March 1. The NAIA national tournament is now a bit different with regional play-in games set for March 11-12, foollowed by the Final 16 March 18-22 in Kansas City.