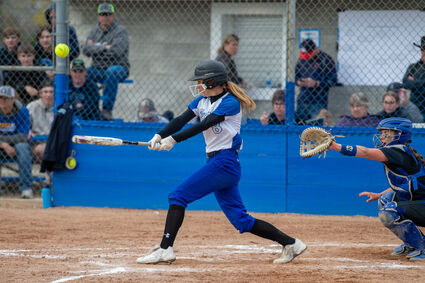 Avery Carlson is one of four Blue Ponies who will play in the Veterans Memorial Softball Classic in Belgrade this weekend.

Many Blue Ponies had standout seasons for the Havre High softball program this past spring as the team took second in the Northeast A and finished with a record of 15-6-1. Now the Ponies' all-state players will be recognized for their success again as they have been selected to compete in the 8th Annual Veterans Memorial Softball Classic in Belgrade this Friday and Saturday.

"It's just an opportunity to get those all-state players together and play. It's a good time of year for maybe some exposure for those kids to some softball programs," said HHS softball head coach Tony Vigliotti.

The softball tournament will have 65 participants this year, a new record for the event. Four of those players will be Havre's all-state players: Sam Lovenguth, Lexi Haney, Quinn McDonald and Avery Carlson. The tournament invited every all-state and all-conference high school player in the state, including recently graduated players who finished their senior season in the spring. The tournament will also have players from all levels of high school play.

The tournament is held to honor Montana military veterans and it will feature five teams named after each branch of the military. Each team will also carry the name of one of the veterans who will be memorialized this weekend: Laverne Parrish (Army), Dean Coleman (Navy), Dean Pogreba (Air Force), Michael Kirkpatrick (Coast Guard) and Louis Charlo (Marines).

Across Friday and Saturday, the five teams will play 10 games to decide a champion. Other events during the weekend include a home run derby, pop-to-pop contest and base running contest.

The tournament will start Friday at 1:30 p.m. with a game between Carlson's Air Force team and McDonald's Marines team. The winner of that game will then go on to play Haney's Coast Guard team later that day at 3:30 p.m. At 1:30 p.m., Lovenguth's Navy team will open the weekend against the Laverne Parrish Army team.