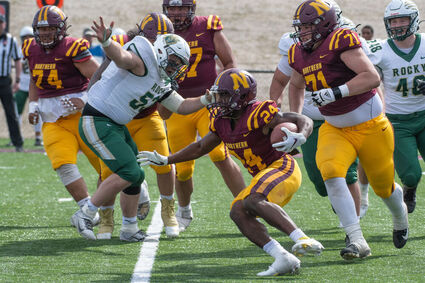 Northern's Izayah Boss runs the ball against Rocky Mountain College at Lights Stadium this past spring. In the shortened spring season, Boss ran for 145 rushing yards and two touchdowns.

To say the Frontier Conference has, over the years, produced great running backs, would be putting it much too lightly. For as long as football fans can remember, some of the elite running backs in the NAIA always resided in the Frontier.

And with a full slate of fall games this season, the league should be poised to feature some great rushers once again.

The Montana State University-Northern Lights certainly want to be a great running team. It's something head coach Andrew Rolin has always believed in, and, on the Northern roster, Andrez Trahan-Proctor was heading towards being that guy....