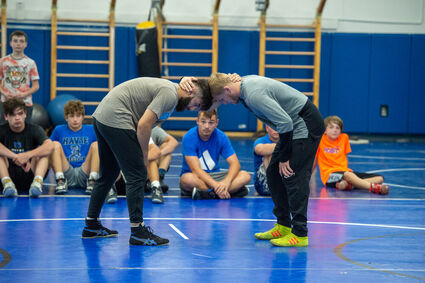 Former Havre High wrestlers Martin Wilke and Parker Filius demonstrate wrestling techniques to kids at a wrestling clinic at Havre High School on Tuesday morning. Filius, who put on the clinic, was a four-time state champion at Havre and is currently wrestling for Purdue University.

Over the past few years, Parker Filius has been focused on making a legacy in the Purdue University wrestling program. He competed in the NCAA National Championships this past season and will soon begin preparation for his fourth season in the program.

While he has focused on his collegiate wrestling career, Filius has not forgotten his roots. As a wrestler for the Havre High Blue Ponies, he left a legacy as he won four state championships. Even after completing his high school career, he continued to add to his legacy as a Pony as he hosted a wrestling clinic for kids at Havre High on Tu...