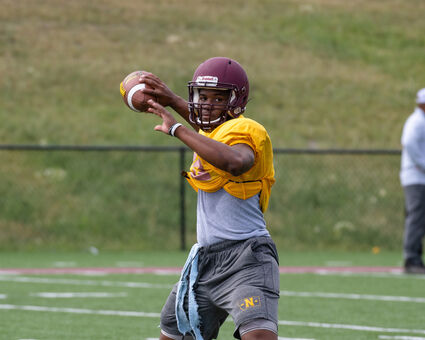 Northern's Kaymen Cureton throws a pass at the Lights fall camp on Tuesday at Lights Stadium. The transfer quarterback from Eastern Kentucky will compete with returning players Brenden Medina and Devonte Armstrong for the starting quarterback position this fall.

In their spring season, the Montana State University-Northern football team went back-and-forth through their quarterbacks to find the right guy. As the Lights went into their fall camp, they still had an open competition between four quarterbacks for the starting position.

During the first week of camp, MSU-N head coach Andrew Rolin has had to evaluate each player to find out which one gives him the best chance at victory. While he has yet to announce a start for their season opener, he believes they performed well in their most-recent practice on Tuesday at Lights Stadium.