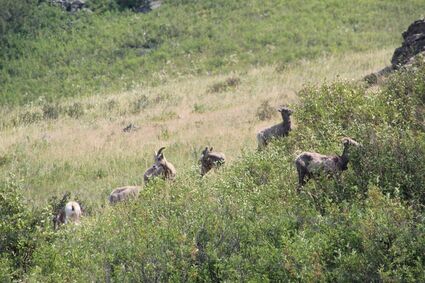 A herd of bighorn ewes and lambs graze on Rocky Boy's Indian Reservation in the Bear Paw Mountains.

While the classic image of Rocky Mountain bighorn sheep is of them in craggy ranges of the Rockies, populations thrive east of the Divide into Midwestern states, and in Montana some of the largest populations are found in the Missouri River Breaks.

Scott Hemmer, Fish, Wildlife and Parks Region 6 wildlife biologist, said that hunting district 680 that stretches north of the Missouri River across Chouteau, Blaine and Phillips counties has regular sheep counts of around 450.

"We're generally not counting all the sheep, so we probably have more likely 6, 700 sheep down there," he said.