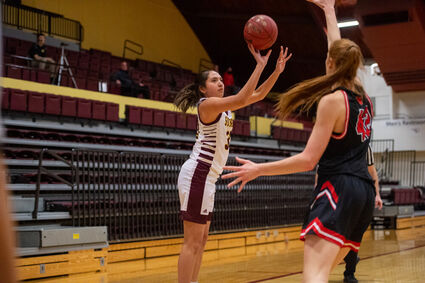 The Montana State University-Northern women's basketball team is looking to a much more normal 2021-22 season, a season that will include a full schedule of non-conference games, as well as fans in the Armory Gymnasium. Northern opens the season Oct. 26 against Dickinson State in Havre.

Coaches like Montana State University-Northern's Chris Mouat are prepping for a hopefully much more normal women's basketball season than the last.

And with that normal comes the return of a full schedule, including something the Skylights didn't get to do much of last year - pay non-conference games.

Mouat recently released the Skylights 2021-22 schedule, which kicks off Oct. 26 against Dickinson State in the Armory Gymnasium.

A year ago, the Skylights didn't play any non-conference games and didn't start the Frontier season until January due to COVID-19 restrictions, but, this season should be different.

MSU-N's non-league includes battles against Central Baptist and Corban University Nov. 4-5 in Great Falls, as well as three games against Cascade College powers in Tacoma Nov. 10-12. Then, the Skylights close out November with a huge home game against Our Lady of the Lake of Texas in the Armory Nov. 20. That game against OLLU will be big as the squad is a perennial NAIA power.

Northern will then open league play in its traditional early December slot with a trip to Carroll College Dec. 2 and a home game against Providence Dec. 4.

December also includes games against NAIA stalwarts Bethel, Menlo and San Diego Christian in Phoenix, before closing out the non-conference season with games Dec. 29-31 in the Armory.

The start of 2022 will see the Skylights playing another new-look Frontier schedule. Each team will play each other three times instead of the four last year, and those games will all be played on Thursday nights at 5 p.m. and Saturday's at 2 p.m.

Northern will open conference play with the pair of traditional December games, starting with Carroll College Dec. 2 and Providence Dec. 4. Conference play starts for good Jan. 6 when the Skylights head to Billings to face Rocky Mountain College, followed by a Jan. 8 trip to Dillon to battle Montana Western. The Skylights then have four straight at home, with Montana Tech Jan. 13, Carroll Jan. 15, Providence Jan. 20 and Rocky Jan. 22 all in the Armory. They then close out January with games at Western Jan. 27 and Tech Jan. 20.

MSU-N remains on the road to start February with a trip to Carroll Feb. 3 and Providence Feb. 5. The Skylights then play their final two home games as they take on Rocky Feb. 10 and Western Feb. 12 before finishing the regular season Feb. 19 at Tech.

The Frontier playoffs will be begin Feb. 22 and run through March 1. The NAIA national tournament is now a bit different with regional play-in games set for March 11-12, followed by the Final 16 March 18-22 in Kansas City.