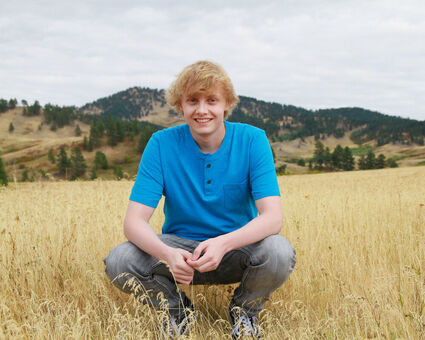 Dylan Scott Hendrickson, 21, of Havre passed away August 15th at Benefis Hospital due to a series of health complications. Services for Dylan will be held at the Assembly of God Church in Havre on Friday, August 20th at 11:00 a.m.

Memorial donations in Dylan's honor can be made to Havre Youth Soccer, New Network of Praise or to a memorial of one's choice.

Holland & Bonine Funeral Home has been entrusted with services and arrangements. Please visit Dylan's online memorial page at http://www.hollandbonine.com to leave a message of condolence for his family.

Dylan was born October 22, 1999, to Scott and Jennifer Hendrickson and was welcomed by his older brother, Joshua. From a young age Dylan brought so much joy and entertainment to his family. We could have written a book with his endless witty comments, many of which took place traveling with his grandparents to his aunt Jeri's sporting events.

Though quiet and reserved, he was always listening and could engage on any topic of conversation. He was the family researcher and the quickest one to google any question we had, especially when Mom was wondering why an actor or actress looked so familiar and what movie or show she knew them from.

Dylan enjoyed learning, playing and discovering music. He played alto sax in the school band and had taught himself a little guitar after a brief class in school. History classes were his favorite both in high school and the semester he attended MSU-Northern, and he earned an academic award for Social Studies during his senior year at HHS.

Dylan's interest in cars led to a love for Formula 1 racing. With the time zone difference, you would often find him watching a race at 3 or 4 a.m.

In 2012, at the age of 13, Dylan was diagnosed with Hodgkin's lymphoma. This was the start of his many stays at Seattle Children's Hospital and the Ronald McDonald House. Dylan loved to play soccer and was an avid Seattle Sounders fan. During his stay at the Ronald McDonald House, he was able to attend a Sounders game and sit in the box seats. During his last stay in Seattle, he was also visited by a couple players from the Sounders.

His love for trivia also increased while in Seattle. His occupational and physical therapists loved coming up with questions they could ask him during his workouts. He would often amaze us with the amount of knowledge he could retain.

Dylan was a fighter! He overcame many obstacles and you rarely heard him complain.

Dylan was preceded in death by his grandmother, Judy Matter.