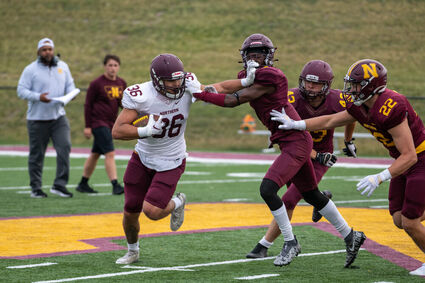 Northern's Mason Dionne runs the ball in the Lights' scrimmage at Tilleman Field on Saturday. The scrimmage ended the Montana State University-Northern football camp that began earlier in the month.

After a spring season that saw no fans in the stands, Tilleman Field filled up again for the second time this August when the Montana State University-Northern football team held their second scrimmage of the fall camp on Saturday. The scrimmage served as the finale of the Lights' camp that had been ongoing for several weeks. With fall camp finally over, MSU-N head coach Andrew Rolin believes his team performed well in their final session before the season.