Completed over a year ago, Northern's new football stadium will finally open its gates to the fans 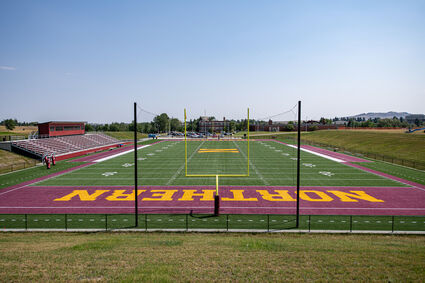 Tilleman Field sits empty on a blue sky day in Havre recently. The stadium was completed in the fall of 2020, and was even dedicated. But, the stands have never had fans in them to see a game because of the pandemic. On Saturday, that will change as Northern is expecting a sellout crowd for their 2021 season-opener against the College of Idaho Yotes.

The Montana State University-Northern Lights have had ceremonies dedicating their brand new on-campus stadium. They've had ribbon-cuttings, they've honored the man it's named after (Mike Tilleman). They've even played two Frontier Conference games there. They've set foot on the turf many, many times now. IN fact, so many times so, that, the stadium isn't really brand new anymore.

But, what the Lights haven't done is, plain a Saturday afternoon, in the fall, in front of throngs of fans. The pandemic has kept that from being a reality for over a year now.

That however, is all about to chang...