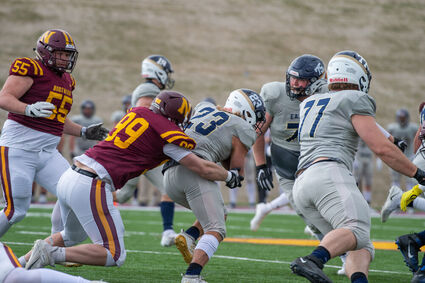 Northern's Pat Hammond makes a tackle against Eastern Oregon University at Tilleman Field this past spring. The Montana State University-Northern football team will open Tilleman Field to fans for the first time when they host College of Idaho for their season opener on Saturday.

Heading into his fourth year leading the Montana State University-Northern football team, head coach Andrew Rolin hopes they take the next step as a program. However, their first step to achieve that goal will be against the College of Idaho, the 19th-ranked team in the nation, at Tilleman Field this Saturday. As the Lights open their season against one of the top teams in the Frontier Conference, Rolin knows they will have to give the Yotes everything they got.

College of Idaho was one of five teams that played in the shortened spring season where they finished 3-1. It was the second year in a row where the Yotes at least won a share of the Frontier Conference championship. In the spring, College of Idaho defeated MSU-N, 26-12, in Caldwell, Idaho.

If they are going to be more competitive this time out, the Lights will look to limit the Yotes' offense. Running back Nick Calzaretta returns after finishing third in the Frontier this past spring with 273 rushing yards as well as a conference-leading four rushing touchdowns. Rolin believes that Calzaretta is one of the top rushers in the conference and will be the focal point of their offense this Saturday.

While Rolin is certain Calzaretta will be a force on Saturday, he is not so sure about the Yotes' quarterback situation. In the spring, both Ryan Hibbs and Jake Holcomb got playing time for College of Idaho so Rolin does not know who will be the starting quarterback this weekend. In the spring, Holcomb completed 58.3 percent of his passes for 348 yards, one touchdown and one interception. After he suffered an injury, Hibbs finished the season by completing 57.7 percent of his passes for 652 yards, five touchdowns and six interceptions. Transfer quarterback Jack Rise also has a chance of starting this weekend. Whoever gets the nod at quarterback, Rolin knows his team needs to slow them down as well as Calzaretta.

Along with slowing down their offense, the Lights will have to get their own offense going with newly-appointed starting quarterback Kaymen Cureton. The last time they played the Yotes, the offense did not score until the fourth quarter. Over the course of the game, the Lights also turned the ball over twice. If their offense is going to be more competitive this time, they will need to hold onto the ball and take advantage of big plays.

If the offense is going to get going, they will need to overcome the Yotes' defense. Cureton will have to throw against the likes of defensive back Isaiah Abdul who returns after leading the conference with four pass breakups and was third with two interceptions. The Lights' running game will also have to get past linebackers Dylan Martinez and Joey Calzaretta.

It has been several years since the Lights have won a conference game. Getting one against the Yotes this weekend will be an immense challenge for the Lights, but if they want to make that jump as a program this fall, it is a challenge they must be ready to take on.

MSU-N football opens the season against College of Idaho this Saturday at 1 p.m. at Tilleman Field.